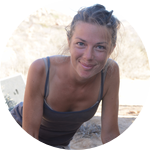 Joleen is the project field team manager and grew up in France, passionate about wildlife and the mountain environment. When she entered the University of Science in Nice, South of France, she didn’t imagine she would end up in South Africa. She has worked on two carnivore conservation-focused projects in South Africa. As a research technician in the Northern Cape of South Africa, she learned about the diet and behavioral ecology of caracals and leopards on farmlands and protected areas. After returning to Cape Town, she began volunteering on the Urban Caracal Project so that she could use her training to focus on the effects of urbanization on caracals in the Cape Peninsula. Although she started as just a volunteer on the project, she quickly showed with her dedication that the project couldn't do without her! She has taken over managing the field aspects of the project, giving Laurel more time to attend to fieldwork herself, but also all the boring admin!

Joleen's pledge activity based on country

Projects that Joleen funded that have shared project outcomes