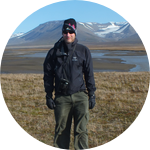 I am a first year PhD student at Oxford University based at the wildlife conservation research unit (WildCRU) which some people may remember from the Cecil the Lion incident. I am incredibly fortunate to get to spend my time working on some of the most fantastic species on the planet and travel to some of the most fantastic places, all in the name of a career. I have worked on a range of large carnivores including, bears, wolves, foxes and more as well as on birds or other groups. I got into this line of work out of a love of animals that became a love of science. Science represents the ultimate form of problem solving for humans as a species and getting to be a part of the group that expands human knowledge is a humbling experience. Between all my work there has always been a common theme of how humans are impacting the health and behaviour of animals. This project represents a pinnacle of this, getting to work on a highly endangered species with it's health directly impacted by humans, feels like the culmination of all the work I have done previously.