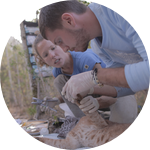 Justin grew up in Washington state, USA and became the Urban Caracal Project's first first-full time volunteer in the Spring of 2015. Justin’s research interests involve investigating the effects of urbanization and climate change on carnivores, particularly in regards to hybridization and genetic drift. After returning to the U.S. in August of 2015, Justin continued his involvement with the Project by providing technical support for analyzing spatial data via GIS platforms.

Since his initial 5 month field season with the UCP, Justin has served as a technician on an immunocontraception wildlife management project in North Carolina and is currently working with the Florida Fish & Wildlife Commission on a black bear demographics study. Justin’s exposure to intense research-based biology during his time at the Urban Caracal Project has given him a competitive edge in the wildlife field and has helped him secure his path for graduate studies within the fields of ecology and conservation biology.