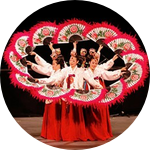 Our main purpose is to find a connection between Korean and Japanese music. We conducted a survey where the random western people tried to find any similarity between these two and we concluded that the first part (music from South Korea called KPop) was more appealing to most of them.

There are more than just the compositions. We can give an examples like dramas (TV shows), variety shows and KPop albums and other merchandise. Many customers from Asia are spending their money to get the newest items that come from their beloved ones. They are watching TV series and comedy shows.

The painting as an art became very popular during the Joseon period when painters - together with writers - created beautiful books. Other artists made works full of realism and presented architecture, landscapes and people.

There are many unique characteristics about Korean culture. Like handicrafts produced in this country that are made of glass and paper. And of course pottery, pots and jewelry made of brass.

The traditional music called Pansori in Korean was even acknowledge by UNESCO (not to mistake with court music). The new pop music is a contrast to the old compositions.