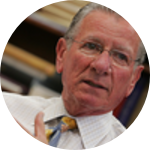 About
Melvin F. Baron, PharmD., MPA, is Associate Professor of Clinical Pharmacy at the USC School of Pharmacy. He received his Pharm.D. in 1957 and his MPA in 1973, both from USC. Dr. Baron was in private practice from 1957 to 1987 and developed a unique home health care center providing infusion therapy, ostomy care, durable medical equipment, and respiratory and incontinence care. He joined the USC School of Pharmacy faculty on a part-time basis in 1981 and became a full-time faculty member in 1990.

As a member of the clinical faculty, Dr. Baron serves as the Director for the first level externship program, which he helped create. In addition, he is the co-director of the PharmD/MBA Program and is responsible for teaching clerkships in Pharmacy Administration.

Dr. Baron serves as a consulting pharmacist for several community clinics that serve indigent patients in Los Angeles County. He is a member of the California Safety Net Alliance Pharmacy & Therapeutics Committee. He is a Fellow of the California Pharmacists Association and the American College of Apothecaries.

Why is breast cancer detection important?

Why is breast cancer detection important?

Our team would like to give you an update on the breast cancer fotonovela. As you may know, thanks to your generosity we’ve exceeded our goal of $5000 by $1000.This is a very exciting time for us ...

Here is a photo we took at the Festival of Books in 2011. These are pharmacy students distributing copies of the fotonovelas! We want to express our appreciation for your generosity in support o...