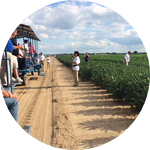 Moneen Jones, Ph.D., is an Assistant Professor at the University of Missouri, Fisher Delta Research Center, Portageville, Missouri. She is currently a row crop entomologist who helps growers of rice, cotton, soybean, sorghum, and corn use integrated pest management to balance economics with conservation of beneficial insects.

At age 28, she went back to college with the intent of getting a bachelors degree in psychology. That major later changed to Biology when she realized you could get paid to work outside in jeans and a tee shirt as a Biologist. She earned a BS in Biology from Elmhurst college (2001), a MS in Biology (Northeastern Illinois University, 2006), a MA in Geography & Environmental Science (NEIU, 2006), and a Ph.D. in entomology at the University of Illinois, Urbana-Champaign (2010).

In 2010, she accepted a postdoctoral research and extension entomologist position at the University of Florida in Immokalee, Florida. Her research focused on management programs for the Asian citrus psyllid (ACP), the vector of citrus greening disease.

Following her postdoc appointment, she accepted a faculty position in August of 2013 as an Assistant Professor of Research in Entomology at the Fisher Delta Research Center (University of Missouri).

In March 2015, she started the Missouri Pollinator Conservancy Program. The program helps to benefit the more than 400 native species of bees and pollinators in the state of Missouri.

This year, she started the Master Beekeeper Certification Program for Missouri beekeepers. The education benefits the more than 3,000 hobby beekeepers of Missouri.

Jones lives with her four dogs (Milo, Yumi, Cosette, and Joli) and two cats (Mouflette and Missy) in a small town of 713 in the Bootheel of Missouri. She enjoys knitting, crafts, and rubber stamping. She also loves collecting civil war currency, fountain pens, antique glass, and pocket watches.

Sampling kit arrives to our beekeepers

One of our participants was so excited about participating in our study, that she posted this photo on her Facebook page. We are excited, too!