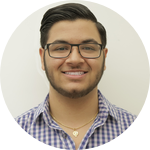 Interactive Media Developer and IT

In the lead up to NASA's Mars Curiosity Rover landing on Mars in 2011, my 6th grade teacher asked the class "will people ever live on Mars?". A startling majority of my class responded with an apathetic and pessimistic 'no, people will not live on Mars". I, however, was one of few who individuals who commandingly declared that the colonization of Mars was possible. My teacher asked what drew me to that conclusion, and I valiantly responded "no one ever thought we'd even reach the moon, but we did". My logic, yes, was a little flawed, but my answer encompassed something beyond my reasoning: optimism. And it is that optimism that inspired me as a child to try and innovate paper airplanes, inspires me now to refine my technological skills, and will inspire me to take action to achieve goals that were previously deemed impossible.