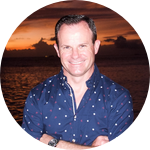 A firm believer in the power of science and the ability to do better.

A computer systems engineer (Ex EDS) who has sophisticated experience in consumer engagement and business management, particularly in the consumer recreation sector.

He will lead all project partnership efforts and implementations and will coordinate the development of participant outreach and engagement activities.

In 2012 he led a team of 19 to explore a seamount south of Cuba to study population densities of invasive Lionfish, as part of the documentary film, 1000 Days for the Planet.

A South African native, that now lives in Florida.

Dear 2°C Supporters,It is with regret that we completed the final stage of the experiment campaign without reaching our intended goal. Although the Experiment project process has been helpful to co...

Test climate observations are passing from the LEAF sensors to the mobile phone application, then transmitted via LTE and being received to the server database!

I wanted to take a minute to offer thanks to everyone who has reached out and/or donated to support our work so far in this campaign. We are really hoping to bring this project to life and we could...

We are thrilled to be getting this experiment started and hopeful for your support! We are offering a disruption to climate studies by democratizing the way these data are collected, allowing the a...

Our mission is to empower people by creating a sustainable, widespread network of citizen scientists who actively and routinely contribute reliable climate observations to the global climate observ...

2°C LEAF App v.1 Our application provides the user with the tools needed to participate in making environmental observations, by connecting directly to the 2°C LEAF Climate Sensor. However, it aims...

Dr. Karsten Shein hard at work in the lab.Grants and donations are a true lifeline for 2°C.