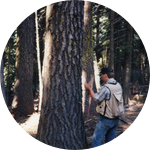 Forest life sciences have been a research interest of mine since my first experience in Pacific salmon stream restoration in the late 1980's. Since that time I have gained experience in wildlife population and habitat surveys, forest ecology and management, and ecological economics. This project and my proposed field work is a culmination of both work and research experiences, and when completed, I hope to pursue my PhD and work on global forest preservation issues. I am a graduate student of Geographic Information Sciences with an orientation toward biogeography and forest ecology. My background includes contributing to wildlife studies in the Altai Ecoregion of the Russian Federation, specifically monitoring surveys of Siberian Snow Leopard, Altai Argali and Siberian Ibex, and in the Klamath Ecoregion of Southern Oregon and Northern California for Northern Spotted Owl, Pacific Fisher and American Pine Marten population and habitat surveys. My forest research interests have taken me to the Olympic Peninsula in Washington State, the Kenai Peninsula of Alaska, Yellowstone and Grand Teton National Parks in Montana, and Wyoming, Fiordland National Park, New Zealand, and the Sierra Nevada in California. My field experience includes several years of forestry in Northern California. My current study extent is located in and adjacent to the Russian Wilderness in the Klamath National Forest, an area with the highest known conifer biodiversity in North America.

Using data from USFS LiDAR missions, as well as multispectral image data from DigitalGlobe, I have been able to identify several forest canopy charateristics that will be used to site ~70 biodivers...

August 6, 2016 UPDATE: The California DWF Biogeographical Data Branch forwarded me an updated library of Dr. Sawyer's early research this week. There comments were as follows: "What you unearthed w...

http://unixlab.sfsu.edu/~pdunn...My field data will be uploaded to this map this week from the SFSU Geospatial Lab. Info boxes will be placed on each plot or point of interest and include pictures.

Despite a substantial heatwave that hit on the second day of the trip, I was able to accomplish what I set out to do on the initial visit to the Sugar Creek watershed in preparation...

An outside source of funding allowed us to fully fund an HP EliteBook Workstation with a 1TB SSD ($1,500), and it will be needed given the volume and complexity of processing we anticipate. As well...

August 6, 2016 UPDATE: We have decided to use a classification scheme outlined in page 13 of "Creating a Forestry for the 21st Century: The Science Of Ecosytem Management", from a review of "succes...

The software selected for forest canopy and classification analysis is the ENVI platform, which is coded in the Integrated Data Language (IDL), a scientific language used extensively by NASA and we...

In early 2012, after an IT project wrapped up in New York, I traveled to the Olympic Peninsula by public transport with a backpack and went flyfishing for steelhead. I had done fair...

Many Northern California residents and visiting outdoor enthusiasts may not realize that within 600 kilometers of the SF Bay Area we have one of the most magnificent and studied temperate forest la...

klamath-siskiyou
22
0
1
Thanks. I will be back for the first full survey in two weeks or so. Should be lots of pictures after that, and plot data to share.
How does forest structure and microclimate impact plant biodiversity in a Klamath-Siskiyou Ecoregion montane forest?
View comment