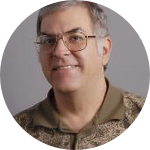 Dr. Robert Phillips received his B.S. in 1974, and Ph. D. in Chemistry in 1979, from the Georgia Institute of Technology, working with Dr. Sheldon May. Dr. Phillips was then a postdoctoral fellow at the NIMH with Dr. Seymour Kaufman from 1981 to 1983 and at the NIADDK with Dr. Louis A. Cohen from 1983 to 1985. Dr. Phillips became Assistant Professor in the Departments of Chemistry and Biochemistry and Molecular Biology at the University of Georgia in 1985. He was subsequently promoted to Associate Professor in 1991 and Professor in 1996. His research interests are in structures and mechanisms of enzymes in amino acid metabolism, and stereochemistry of alcohol dehydrogenases. Dr. Phillips has taught courses in organic chemistry and medicinal chemistry at the undergraduate level, and physical organic chemistry, bioorganic chemistry, and organic spectroscopy at the graduate level. On his limited free time, Dr. Phillips enjoys fly fishing. Google Scholar.