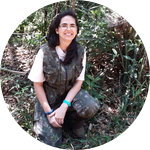 M.Sc in Ecology, Ph.D. Candidate in Ecology from State University of Campinas, Brazil

Why do spiders decorate their webs?