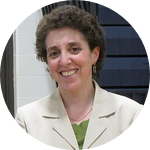 How do gorillas see the world?

How do gorillas see the world?