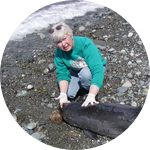 Sandra's pledge activity based on country

Projects that Sandra funded that have shared project outcomes