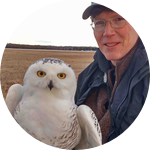 Scott Weidensaul is the author of more than 30 books, including the Pulitzer Prize-nominated "Living on the Wind: Across the Hemisphere with Migratory Birds, and the Peterson "Reference Guide to Owls of North America and the Caribbean." He is a contributing editor for Audubon, lead columnist for Bird Watcher's Digest, and feature writer for Living Bird.

Weidensaul is a co-founder of Project SNOWstorm, using GPS-GSM transmittters and other techniques to study snowy owl wintering ecology. Since 1998, he has been the research coordinator for Ned Smith Center for Nature and Art, Millersburg, PA, overseeing one of the largest saw-whet owl migration studies in the country, including the use of banding, genetics, radio-telemetry, geolocators and radar. He is co-coordinator of Project Owlnet, an international network of 125 independent owl migration research sites, and he is one of fewer than 200 licensed hummingbird banders in North America, collaborating with colleagues across the continent to document the rapid expansion of western hummingbird species into the East. He is a co-founder of the Critical Connections project in Denali National Park, Alaska, working with National Park Service to study migratory bird ecology in Interior Alaska, and a co-founder of the Northeast Motus Collaboration, using automated radio telemetry technology to further the study of migratory birds, bats and insects in the northeastern United States.

Are biofilms responsible for heavy metals on plastic debris?