I am so thrilled to let you know that three years (almost to the day) after I finished my graduate program, I have a publication to share with you!  It took some grit, lots of perseverance, and a great deal of others coaching me through the process, but it was so important that I see this through, giving up was not an option. This being my first publication, there was a steep learning curve, and perhaps even more so because I was working outside of my field during the process. On that note, I am excited to also share that I am now working for a non-profit organization in Blue Hill, ME that studies marine environmental biology and the impact on human health, including microplastics. Both of these lovely life events occurred–as they tend to do– just when I thought they never would.

Feel free to read the paper if you wish. As I mentioned, the learning curve was steep, and even now wish to high heaven I could still edit parts of it. But at worst, it is a little reminder of how we always continue to learn and grow.

Thanks for being on this journey with me.

I want to know how ocean bacteria and algae that live on plastic debris influence the toxins plastic picks up.

Plastic debris picks up chemical pollution like heavy metals, pesticides and flame retardants from the water. These are toxins which then could be transferred to marine life, and possibly the seafood we eat.

Plastic is colonized by bacteria and algae the minute it gets into the water, and these cells form a mucus film, similar to plaque on our teeth, called a biofilm. We know biofilms alter the way chemicals stick to sediment particles, but exactly how these organisms alter the way plastic debris attracts and accumulates chemical pollutants remains a mystery. We need to find out so we can make more informed estimates about plastic as a potential source of toxins for marine life.

The scientific literature on plastic marine debris is extensive, and can be classified into three categories; abundance and distribution, chemical interactions, and biologic interactions.

Two papers independently have suggested that there is over 250,000 tons of plastic in the world's oceans broken up into 5 trillion pieces.

We know this plastic collects persistent toxins like flame retardants, pesticides and heavy metals. Experiments have shown that these toxins can cause stress for marine organisms when ingested along with plastic particles.

Almost nothing is known, however, about how biologic interactions such as colonization by bacteria and algae influence the behavior of chemicals attracted to and collected by plastic marine debris.

Understanding how fouling affects the toxins attracted to plastic will give us a better understanding about the significance of plastic as a vector for bringing toxins into the food web.

Colonization of plastic debris by microorganisms alters the affinity some chemicals have for plastic's surface. Fouling may make plastic a better place for heavy metals to collect because it decreases the surface hydrophobicity. Therefore, anything eating fouled plastic may get larger doses of lead and copper than uncolonized plastic.

However, most surfaces underwater are colonized by microbes, and experiments are needed to understand whether plastic is a significant source of these heavy metals, or if any surface prone to colonization by microbes will accumulate similar loads of heavy metals from the water.

The experiments I will perform have two aims, both of which will quantify metals and biofilms on beads less than 5mm in diameter.

Second, I will deploy three different materials (glass, LDPE and biodegradable plastic) in two different locations of a metal contaminated bay to see how these patterns hold up over space and time. This second aim will act as a way to ground-truth bottle and laboratory experiments performed to clarify the driving mechanism behind the sorption of metals onto plastic debris.

This is a project that I've developed over the course of my 2.5 year graduate school experience, and it took a few false starts to figure out exactly what I want to do, and how I will do it. I was able to get a university grant that allowed me to purchase lab equipment and reagents used in my experiments. Other funding I was relying on for metal analysis has fallen through. I have already collected samples that need to be analyzed as soon as possible. I am eager to begin looking at the data and writing up the results so that I can get my Master's degree and move on to a PhD program by next year.

Every little bit helps. This is not something my lab already had funding for, and I can't perform the metal analysis or acquire the necessary materials without it. 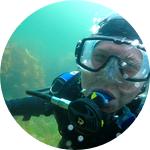 I grew up in New England, and from my early days have had a bit of salt running through my bloodstream. I was always fascinated by marine ecosystems, but became serious about Marine Biology after spending a summer on an island on the coast of Maine.

Aside from all the work I've put into it, this project is meaningful to me because I am dedicated to ocean conservation, and feel a strong responsibility to work towards a sustainable future for marine resources. Making a contribution in the field of plastic marine debris is extra special because not only is it a visible issue that many people can relate to regardless of their background in science, but it would also create a precedent for other graduate students at my campus study plastic debris.

When I'm not doing research, I am working as a naturalist on a whale tour or finding quiet places by the ocean. I am an outdoor enthusiast, photographer and musician.

I've always wanted to work towards a sustainable future. In grade school I wore "Save the Tiger" t-shirts and sang songs about protecting the environment in a group called "Color Me Green". As an undergrad in New England, it was the science of Ecology and Evolution that I became enthralled with, and have been working to share that passion with others for the past decade. Creating my master's project has been a sometimes bumpy, but always exciting ride, and I'm very eager to see what comes of it!

16 Lab Notes Posted
Published in Science of the Total Environment
Featured in Chemistry World because of YOU!
The Grand Finale 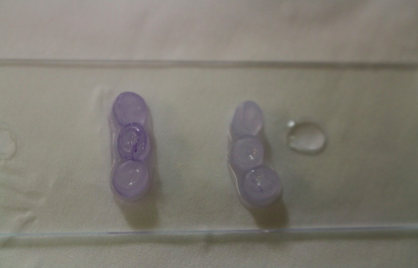 Crystal violet is a dye that binds to biomass formed by bacteria and alga colonizing the plastic beads used in my experiments (pictured above). The more purple the beads are, the more biomass is on the beads. In this way, I can indirectly measure how much fouling is occurring over time, and find out how this influences sorption of dissolved metals through experimental manipulation.

Pictured below is a photograph of a diatom species colonizing an experimental plastic bead magnified at 400x and 100x (left to right). The cells appear to be embedded into the surface of the plastic. If this is the case, colonizing cells may alter the specific surface area of the plastic and create more surfaces for toxins in the water to precipitate onto. Measuring the specific surface area of the beads before and after a month of colonization will help uncover the role of microbes in altering the surface area of plastic. 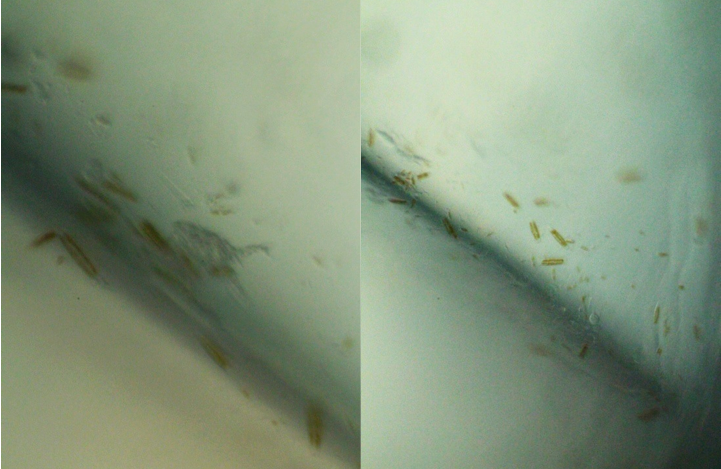