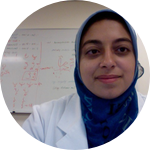 About
Weam is currently a Research Associate in the Williams lab at Smith College. Weam received her Master’s degree at Smith College with Dr. Steven A. Williams. She works on several projects in the lab such as gene expression studies of Wolbachia, RNA-seq projects to study gene expression, and generating and refining molecular diagnostics for neglected tropical diseases. Weam is also our resident entomologist, maintaining different mosquito species in an insectory, identifying and meticulously dissecting mosquitoes, making her our very own mosquito queen! Weam has worked on an extremely wide variety of projects and has an impressive skill set in both the lab and the field. Weam also has experience in the field collecting mosquitoes- an essential part of our project. She is involved in two projects in Haiti screening and collecting data for the prevalence of lymphatic filariasis. Originally from Egypt, Weam brings a unique perspective to the team.

Hello Zika group, very interesting project guys! All the good luck with you! I was wondering which Isothermal amplification assay you will use? Is it RPA or HDA or LAMP! I have been working on Isothermal Amplification for diagnostic using HDA and found it's not the best way. If you are about to try one of these, I will recommend to try the RPA (Recombinase Polymerase Amplification) from TwistDx . Good luck!
Detection of Zika virus rapidly without the need for a laboratory in Brazil
View comment