Sensory information from tongue stimulation can be used to compensate for both balance and vision dysfunction. Long lasting effects have been observed even after discontinuation of the device in patients with imbalance, suggesting a permanent learning at a neuronal level. To investigate transfer between senses, we study whether using FDA approved BrainPort V100 device in blind patients results in generalized effects in these patients, including improvement in the sense of balance.

In the past decade, tongue stimulation has been used as a non-invasive method to substitute loss of vision or balance. Digital information from a video camera (in blind patients) or head tilt information from a sensor (in patients with imbalance) is used to stimulate the surface of the tongue through an electrode array, resulting in bubble-like patterns that are then interpreted as an object or direction of head tilt. Even post-stimulation, patients with imbalance show improved balance long after discontinuation of this device. This is due to the multisensory nature of balance, suggesting an enhancement of other sensory inputs (e.g., visual) as a result of using the device. To date, the crossover between different sensory pathways after tongue stimulation has not been studied.

If proven, a wide range of disorders could benefit from tongue stimulation due to the transfer of learned information across different sensory systems. This is particularly useful since usually multiple sensory systems are affected by the same disease (e.g., hearing and balance or vision and balance). As such, patients will benefit greatly from such a general treatment that affects multiple senses at the same time.

We aim to study whether tongue stimulation can provide a general non-specific effect on neural pathways. Ten subjects with profound visual loss and abnormal balance will use the FDA approved Brainport V100 device. The effect of the device on navigation and balance will then be measured using standard tests before and after training. The device will be either ‘on’ or ‘off’ during test sessions. We expect to see long term improvement in balance due to non-specific effects on central brain areas such as the balance related vestibular nuclei in the brain stem, mediated different neuromodulatory pathways activated by cranial nerve activation through tongue stimulation.

1) We will buy a Brainport V100 device that recently got FDA approval and is used for stimulation of the tongue in blind patients. We buy it from Wicab, the company that builds the device. For research purposes, we get the device at about a third of the actual price.

2) A training session (500$ training fee + other expenses including airplane tickets) is required for the researchers who will use the device. A representative of the company will come from Wisconsin to our lab in Buffalo, NY to train users.

3) We will compensate $50 for each patient that completes the training and experiment sessions. We aim for a sample size of 10 patients for this study. 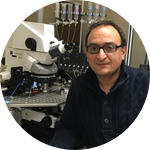 Center for Hearing and Deafness, Department of Communicative Disorders and Sciences, State University of New York at Buffalo
View Profile 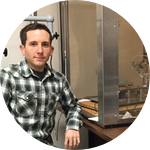 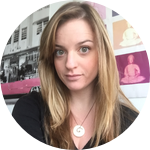 Dr. Sadeghi has worked on imbalance and its compensation since 1990s. He has studied compensation following loss of balance in patients and animal models. Specifically, he has compared rehabilitation programs in patients with chronic balance (vestibular) disorders, investigated the underlying changes in neuronal networks during compensation as well as changes at the cellular level in the receptors that provide the sense of balance. He is currently using both cellular and systems level approaches in his laboratory at the University at Buffalo to better understand changes that occur in vestibular pathways during compensation. The goal of these studies is to gain a better understanding of balance pathways and find specific drugs and rehabilitation methods to improve compensation in patients with imbalance and dizziness.

Eric Tyler is a third year Doctor of Audiology candidate at the University at Buffalo who in addition to his clinical work and teaching responsibilities, also pursues research in Dr. Sadeghi's lab. He has been performing neuronal recordings from the vestibular nerve and supervises this current project.

Natalie Walsh is a first year Doctor of Audiology candidate at the University at Buffalo. She is conducting the current research to gain better understanding of the neuromodulatory pathways that mediate the effect of tongue stimulation on sensory processing. She will perform the current study in Dr. Sadeghi's lab and collect data from patients with vision and balance dysfunction using tongue stimulation.