Symbiodinium is algae that reproduces in as little as 24 hours; 10,000 times faster than the average American woman! They also play crucial roles in the health of coral reefs, as they form mutualisms with reef organisms. I will examine how diverse communities of Symbiodinium can rapidly evolve in response to increased nutrients. Evolution of one partner could be key to the survival of the mutualism and to the persistence of a healthy ecosystem.

Coral reef ecosystems are rife with species that have evolved to endure nutrient-poor waters by forming mutualistic partnerships with Symbiodinium. These single-celled photosynthetic algae live inside of their hosts, bartering photosynthetic products for nitrogenous waste products. Resource mutualisms like these are inherently sensitive to changes in the traded resource in the environment. Because human agricultural practices and fossil fuel combustion have caused widespread increases in N deposition, this ecologically important mutualism may be affected.

This mutualism is characterized by differences in generation times: corals that live long lives are paired with unicellular algae with short lives. This means that corals have limited capacity for rapid adaptation in response to sudden changes in the environment. However, rapid evolution in their partners may buffer the effects of environmental disturbances upon their mutualism.

Coral reefs are among the most biodiverse ecosystems on earth, and among the most threatened by climate change. This study may have important conservation applications as it may provide insight into how important members of the ecosystem may respond to climate-induced changes in nutrient cycling. My study will address how a diverse symbiont population can rapidly evolve in response to a changing nutrient environment, a necessary prerequisite for mutualism evolution.

Models are now integrating ecological and evolutionary perspectives more frequently. According to a review by Haloin and Strauss, very few of these models do so while examining mutualistic interactions.

Many genotypes of Symbiodinium can live inside of a single host coral. I will consider how algal genetic diversity affects performance and how N-enrichment may alter this relationship. Genetic diversity forms the base upon which natural selection acts, assuming that differences in phenotype correlate with differences in fitness. Understanding the role of genetic diversity is crucial in understanding how selection pressures arising from changes in nutrient levels may affect the evolution of Symbiodinium within coral hosts.

Throughout my project, I will define “performance” as traits that will likely affect the mutualistic relationship between the host and algae such as cell size, population growth rate, photosynthetic rate, oxygen production, nitrogen consumption and carbon concentrations. I have three goals of this project:

2. To determine the effects of genetic diversity on performance at different nutrient levels.

3. To address how these populations of varying diversity levels will evolve over six months, which encompasses several hundred generations.

To properly replicate my experiments, I will end up with hundreds of independent cultures of algae. While I can make most measurements in my lab (cell size, population growth rate, photosynthetic rate and oxygen-production) I will need to send my samples to another lab in order to have them analyzed for nitrogen and carbon concentrations. This will cost me approximately $10 per sample. My goal is to raise enough money to cover the cost of 100 samples. All contributions will go directly to this cost!

If I surpass my fundraising goal, I will continue to use the money for carbon and nitrogen analysis!

Testing whether species evolve in response to rapidly changing environments is key to understanding ecology in the 21st century. Symbiodinium provides most of the basal nutrition to coral reef food webs. Without them, reefs would not exist. But their short generation time means they may have the greatest capacity to adapt! These experiments are crucial to understanding the role of evolution on coral reefs and interactions between mutualist species. If these important species can adapt to global change, there may yet be hope for coral reefs. 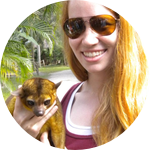 I am a graduate student studying Ecology and Evolution at California State University Northridge. I received my BS degree in Environmental Sciences from the University of Virginia in 2012. Because I also studied art history and photography at UVA and throughout high school, visual culture and learning really resonate with me. While I plan to continue doing research, I hope to expose it to those who are not students of science through photography. In addition to science and photography, I love cooking and eating new foods, playing tennis, hiking, and visiting my family, friends and dog in Virginia.