Radiocontrast enhanced imaging is increasingly used for the diagnosis and treatment in hospitals. Kidney injury is a consequence of radiocontrast enhanced imaging. Contrast-induced nephropathy (CIN) can lead to prolonged hospitalization, dialysis, renal failure or death. There is no effective treatment approved by the FDA to prevent CIN. We plan to develop a reliable drug treatment for contrast-induced nephropathy.

Pituitary adenylate cyclase-activating polypeptide (PACAP), a natural endogenous protein, was discovered in our lab. And, we found that PACAP has protective effects against several types of kidney diseases. Different laboratories have already administered PACAP to healthy human volunteers. We have administered PACP to a cancer patient under a FDA-approved protocol without any indication of serious side effects.

These clinical studies and preclinical experiments with animals strongly suggest that PACAP would be an effective therapeutic drug for the prevention of CIN either by itself or in combination with other antioxidant agents such as NAC (N-acetyl-L-cysteine), SPZ (sulfaphenazole) and NCX-4016 [2-(acetyloxy) benzoic acid 3-(nitrooxymethyl)-phenyl ester]. In our preliminary studies, we have found that a combination of PACAP and NAC is more effective to prevent CIN in human kidney cell culture.

Now, we need to study the effects of these therapeutic agents against CIN in diabetic mice.

The cost of patients with acute chest pain in the US alone is estimated to be more than $10 billion annually. Every year, almost 8 million patients with chest pain visit emergency departments in the US and these patients are candidates for contrast imaging diagnosis. But the risks and side effects of contrast material include renal toxicity that could lead to worsening of heart and kidney disease and even death.

Contrast-induced nephropathy (CIN) is an impairment of renal function following intravascular injection of contrast media that is used for imaging heart vessels and chambers. The diagnostic symptoms of CIN include blue toes, dehydration and fluid depletion, triad of fever, skin rash and eosinophilia. The risk for developing CIN may be as high as 50% especially in elderly diabetic patients who may have pre-existing kidney insufficiency. Patients who develop CIN after contrast media intervention sustain an increase in both short- and long-term morbidity and mortality.

Clearly, there is a need to better understand the pathophysiology of CIN in order to develop an effective medication to prevent CIN. The successful outcome of this project should have a significant impact on the development of a new drug to treat CIN. It will also provide safer radio-imaging procedures for diabetic and other cardiovascular patients.

The long term goal of this project is to identify a therapeutic agent that is a mechanism specific for the treatment of CIN. The short term goal is to develop a diabetic mouse model (db/db mouse) that resembles human diabetic patients, so we can apply for an NIH grant to perform in depth mechanistic studies. The outcome of this proposed study will lead to an accomplishment of our long term objectives.

We will be sharing with donors the outcomes in lab notes. We will also acknowledge our donors in future publications. 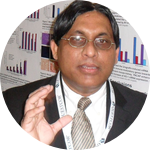 I received training as a molecular biologist during my graduate studies and postdoctoral fellowships. I am currently working as a junior faculty member in the Department of Medicine, Section of Nephrology and Hypertension, at Tulane University School of Medicine in New Orleans, Louisiana. I received training in nephrology as a postdoctoral fellow from a senior faculty member (Vecihi Batuman, MD, FACP, FASN) at Tulane University. Our research focuses on the cellular and molecular mechanisms of acute and chronic renal disorders. The current emphases are on nephropathy due to radiocontrast media. We are exploring the common molecular pathways associated with these acute and chronic kidney injuries. This research program has been extended to investigations on renoprotective strategies, and identification of key steps for intervention (diagnostic biomarkers/drug targets) and development of novel therapeutics to prevent and treat kidney diseases.

Some recent publications from our lab.