Breast cancer remains the second leading cause of cancer-related death in women. The relative failure of therapy to cure breast cancer has brought attention to develop specific targeted therapies to eliminate breast cancer. Our preliminary data demonstrate that DCLK1 is overexpressed and supports breast cancer growth and metastasis. Here I propose to target DCLK1 to reduce cellular properties associated with cancer invasion and metastasis.

This proposal will address the challenge of reducing cancer invasion and metastasis associated with deadly breast cancer by using a novel targeted therapy. A woman born in the United States today has a 1 in 8 chance of having invasive breast cancer during her lifetime. The risk of breast cancer increases with age and with other risk factors. Importantly, breast cancer cannot be considered a single disease. It is a heterogeneous disease that shows remarkably different biological characteristics and clinical behaviors. The major obstacles to breast cancer therapy are cellular heterogeneity, multiple mechanisms of drug resistance and a considerable rate of relapse. Additionally, emerging experimental evidence suggests that specific, targeted elimination of cancer cells is a necessity for successful therapies. Therefore, effective treatment of breast cancer will require the development of therapeutics to target specific proteins critical for breast cancer survival and growth that are overexpressed specifically in breast cancer tissue and deadly metastatic cells. Our preliminary data demonstrate overexpression of doublecortin-like kinase 1 (DCLK1), a microtubule associated protein kinases, in the ductal epithelial and stromal compartment of human breast cancer tissue. Recently we elucidated the functional importance of DCLK1 knockdown in MDA-MB-231 cells (TNBC cell line), which correlates with reduced cancer cell migration suggesting that targeting DCLK1 will reduced cancer growth and metastasis.

Breast cancer is the most frequently diagnosed life-threatening cancer in women and a major cause of cancer-related deaths among women. In 2013, it is estimated that among US women there will be 232,340 new cases of invasive breast cancer. Almost 15–20% of breast cancers are considered triple-negative breast cancer (TNBC), as they do not express ERa, PR, and HER-2. TNBCs are highly metastatic and highly resistant to therapies. Despite advances in surgical and medical therapy, little impact has been made on the mortality rate associated with breast cancer, due to extensive local tumor invasion, metastasis and multi drug resistance. This is a proposal to develop the first effective targeted therapy for this deadly metastatic cancer that are resistant to standard therapies.

My preliminary research data and literatures strongly support that knocking down DCLK1 will reduce the breast cancer growth and metastasis both in vitro and in vivo.

The total cost for this innovative experiment is $10,000. Immunodeficient mice used for the xenograft and in vivo metastasis studies will be maintained at the ‘Rodent Barrier Facility’ at University of Oklahoma Health Sciences Center. Funds requested for buying mice and maintenance at Rodent Barrier Facility. Funds requested for chemicals and reagents for protein and gene expression analysis and purchasing cell culture plates, culture media and antibiotics for culturing cells and analysis. Purchasing siRNA for DCLK1 silencing. Nanoparticle incorporation and animal imaging work will be supported by Prof. Courtney Houchen, Department of Medicine, Oklahoma University Health Sciences Center.

siDCLK1:
Small interference RNA against DCLK1 for silencing the expression of DCLK1 in Breast cancer.

Immunodeficient mice:
For Xenograft (tumor growth and metastasis) and in vivo metastasis analysis.

Funds requested are only being used for conducting the experiments. Initial funding requested will allow to complete the proposed study, and the observed data will give us a medium to demonstrate the feasibility of these important studies to other funding agencies. The development and completion of this project will also provide important building blocks in breast cancer research, which will help to facilitate discoveries that improve the life of patients affected by breast cancer and other cancers. 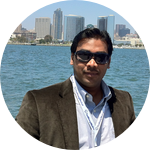 I have a broad background in Cancer and stem cell biology, gastroenterology and endocrinology with extensive training and experience in molecular and cellular biology and animal models relevant to the background knowledge. I carried out research investigating the role of NF-kB/b-catenin/Notch signaling during intestinal crypt hyperplasia and neoplasia. I expanded my research to include the isolation, purification and characterization of intestinal, pancreatic, hepatic, colon and breast stem cells. We have established a tumor stem cell marker, DCLK1, and found it to be upregulated in many cancers. Recently I have established the functional importance of DCLK1 as a protein enhances breast tumorigenesis. My research experience and scientific expertise in the field of stem cell and bresast cancer biology have prepared me to successfully carry out this research.