Fear of bears has gripped humans for centuries but no scientific effort has sought to understand how to negotiate encounters with wild bears. Field experience among professionals suggests that bears use vocalizations and postures to communicate their intentions and avoid conflicts with each other as well as humans. We hypothesize that by understanding their visible and audible communication signals we can develop a predictable and teachable pattern to communicate with bears.

Bears are not generally known as a social species like chimps or lions. However, in habitats with a high density of bears they often use visible and audible cues to communicate and negotiate encounters. While decades of bear-viewing has helped guides and other professionals develop anecdotal interpretations of this 'language', scientific documentation has never been attempted. Because bears aren't typically social, the opportunities and locations to document their social interactions can be a significant challenge. However, our research site is world renowned for a large population of bears that are highly tolerant of humans. Interactions can be observed multiple times per day for several months of the year.

Human-bear conflicts have increased in recent years as bear populations rebound from conservation efforts and humans push deeper into bear country. Furthermore, bears are charismatic creatures that are loved by many, but feared by many others. Regardless of one's opinions, most people fear unwanted interactions with bears.

Years of field experience among professionals suggest that bears communicate with humans in similar ways that they would another bear. As such, a greater scientific understanding of bear-bear communication can ultimately lead to safer experiences and coexistence for anyone who lives, works, or plays in bear country. Using this information, we could train people to properly negotiate close encounters, keeping bears and people alive and safe.

We hypothesize that by understanding the visible and audible communication signals of wild bears, we can then develop a predictable and teachable pattern to communicate with them and help ensure the safety of backcountry users. We will first observe and record the interactions of wild, free-ranging bears using camera equipment donated by National Geographic including 2 digital cameras, 2 zoom lenses, 1 wide-angle lens, and 2 shotgun condenser microphones. Post-field lab analysis will look for patterns in actions and reactions of bears as well as the context, syntax, frequency and interval of each sound. Sound analysis using Raven software will help by visually representing sounds. Our field methods and data analysis will follow Altmann, 1974.

National Geographic has graciously donated $9,000 in camera equipment. Their investment must be kept dry and a long field season kept manageable for the team. In the wet and windy region of South-central Alaska, this is done with high quality tents. Post-season analysis requires two computers to watch each bear simultaneously during an interaction. This equipment will ensure countless field seasons of data collection and documentation.

Tents: A high quality, 4-season tent protects high-end video, audio, and computer equipment as well as provides a place to work in bad weather and rest. A separate, mesh tent with a high ceiling for cooking is a fundamental part of bear safety.

Computers: Two simple, no-frills, quality desktop or laptop computers are required to replay 4k videos of bear interactions simultaneously. This helps reproduce the 'live view' from the field so actions and reactions may be documented.

Jim's many years of experience in reading bear behavior in the wild and ability to consistently observe bear interactions at close range in Lake Clark N.P., Alaska provides a unique opportunity to improve our understanding of how bears communicate with each other and with other species. Since this will be one of the first studies to look into the role of vocalization in bear-bear and bear-human interactions, I believe this project has a potential to make an important breakthrough. This has several implications for human-bear interactions. 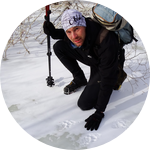 While several years of field experience have led to the hypotheses of this research, and even some anecdotal interpretation of bear 'language', 2019 was the first season of scientific research. Seasons roughly follow the Alaskan summer (June - Sept) when bears are most active. The first field season tested and refined the recording methods and identified areas for improvement. Data analysis and preliminary reporting will begin in November; the next field season begins in June, 2020. 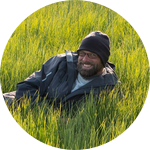 My first experience with a wild bear was a face-to-face encounter in the Canadian wilderness when I was 12 years old. A Black bear became curious about an outhouse (with me in it), and our mutual discovery of the other scared each of us to flee in opposite directions. I remember thinking that the bear didn't behave at all like I'd been told...there was no threatening behavior and no attack.

Some years later I finished a Bachelor's degree in Environmental Science and Anthropology, hoping to help bridge an ever-widening gap between people and nature. I decided to return to Alaska where I began work as a bear-viewing guide, and my life was again changed forever. Every day that I watched bears I became increasingly fascinated by their intelligence, power, and passion.

Over the next couple years I went back to school to pursue a Master's degree while continuing my guide work in the summer. I delved deep into the academic aspects of bear biology in the Master of Natural Resources and Wildlife Management program at Oregon State. During this time I worked with my adviser to write the Black Bear Conflict Technical Manual for the US Department of Agriculture's Wildlife Damage website.

Over the past few years I've continued my field experience with Brown bears in Alaska and participated in the International Bear Association. I have delivered several presentations about bear-related ecotourism and human-bear conflicts. I hope to use the coming research seasons to design and begin my PhD with Dr. Miha Krofel at the University of Ljubljana in Slovenia, during which time I will be studying the social, communication behavior of Brown bears at my research site in Lake Clark National Park. Field research of animal behavior is a lifetime pursuit, and I am excited to add to the body of knowledge surrounding the social life of these charismatic animals.