Building complex biological systems with many genes requires isolating genes. Active genes can cause nearby DNA to become supercoiled, leading to unpredictable behavior of synthetic biology systems. We will test if DNA clamps (made from DNA-binding proteins) placed between genes can stop this interference. If this project succeeds, it will allow bioengineers to build more predictable genetic circuits.

Programming cells often requires building "circuits" of several genes together on the same piece of DNA. Bioengineers have observed that when two genes are placed next to each other, they often unexpectedly interfere with each other’s expression in an unexpectedly orientation-dependent manner.

Nobody knows with certainty what causes this genetic crosstalk, but one promising theory involves DNA supercoiling. The transcription of DNA into RNA, the transcription process introduces supercoils, similar to kinks in a tightly-wound phone cord. Supercoils directly affect the expression of genes, turning them on or off depending on the direction of the supercoil.

If successful, a DNA-binding, gene- isolating clamp could be used in any multi-gene circuit assembly, making multi-gene assemblies more predictable and their assembly much more efficient.

This is particularly relevant when engineering metabolic pathways to produce chemicals like methanol, insulin, or antibiotics, where circuits of many genes are routinely constructed. The physical layout of these circuits can unpredictably affect production of the desired output by several orders of magnitude, so large engineered metabolic pathways must typically be hand-tuned or have many configurations screened for activity. By making gene expression more predictable, our results could greatly improve the predictability (and, therefore, designability) of large gene circuits for metabolic engineering.

We will first build several plasmids (circular pieces of DNA) that demonstrate cross-talk between genes. These plasmids will consist of genes for two different fluorescent proteins (green fluorescent protein and red fluorescent protein) next to each other, in different orientations. We expect to see differences in the relative expression of the two genes depending on how they are arranged and oriented, and we will quantify this effect.

Next, we will try several strategies for removing these differences, including adding extra base pairs of spacing between the two genes and adding DNA "clamps" made from DNA-binding repressor proteins between the two genes. We will again quantify the effects of cross-talk between genes, which will hopefully be ameliorated by our additions.

This is an exciting project by a talented group of young scientists. This group of high school girls has a lot of experience with independent research. They also have the dedication and energy to make their project a success. 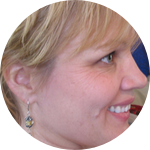 Monica Barsever
Science Teacher (Honors Independent Research in Science)
Alverno Heights Academy
I want to use the results of this project in my own research! This team is addressing a problem that comes up all the time in synthetic biology -- we need to understand this phenomena to build good working, reliable synthetic systems. 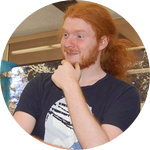 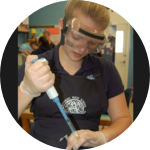 Alverno High School's iGEM 2016 all-girl team is made up of 14 - 17 yr olds, who are passionate about science. Whether they are members of Alverno's Accelerated Honors Academy for Gifted Girls, or HS Seniors, their enthusiasm and curiosity are contagious. They are no strangers to research, and have participated in Caltech's Solar Army, and many individual research projects. With many awards in academics and sports, they are a multi-talented group.

Alverno Heights Academy (High School)'s iGEM 2016 team is made up of students who are passionate about science. The all-girl team ranges in age from 14 - 18 yrs old. Whether they are members of Alverno's Accelerated Honors Academy for Gifted Girls, or HS Seniors ready to go to college, their enthusiasm and curiosity are contagious.Alverno girls are no strangers to research, and have participated in Caltech's Solar Army SEAL Team, Summer SEAL Research at Caltech, and individual research projects. With many awards in academics and sports, they are a multi-talented group, who hail from Sierra Madre and neighboring cities, such as Pasadena, Monrovia, San Gabriel, Altadena, Glendora, Rowland Heights, Temple City, and Arcadia.