Understanding how bioavailable contaminants affect animal physiological performance, immunological functions, and disease susceptibility is crucial to our ability to predict disease outbreaks in the face of combined environmental stressors. This research will assess how chronic exposure to contamination effects an individual's ability to fight off infection and disease and to escape predation.

A great deal of literature exists on contamination in wildlife populations and its effects on survival however little research has provided clear effects on immune function and disease susceptibility. Wild populations are rarely subjected to one stressor at a time so looking at the combination of contamination and disease will help elucidate how populations are responding to multiple stressors and how they may respond to further stress in the future. Specifically, little information exists on a newly emerging snake fungal disease that is spreading throughout the eastern United States. This research will help us predict areas of potential outbreak of this disease allowing us to further study the disease and its spread.

Disease ecology is a growing field especially with so many newly emerging disease (i.e. White-Nose Syndrome, Chytrid Fungus, Ranavirus, etc) and is important if we are to understand the effects that these diseases will have on our wildlife populations. This project will provide an answer to how wildlife populations are responding to multiple stressors in the wake of these new diseases. More importantly, reptiles have been in decline globally and with a newly emerging fungal disease affecting snakes it is imperative that we understand the susceptibility of snakes to this disease when also dealing with other chronic stressors such as contamination. Snakes are dominant predators in many ecosystems, play a critical role in healthy ecosystem functions, and are a food source for top predators.

1. Snakes will be fed fish injected with the pesticide, Atrazine, for a period of one month.
2. A control group will be fed uncontaminated fish.
3. Both groups will be tested for differences in immune function via the ability of individuals to:

A) kill a foreign pathogen within the blood.
B) mount a swelling response after injection with a foreign substance.
C) heal after being wounded.
4. Individuals will then be exposed to spores from the snake fungal disease (Ophidiomyces ophiodiicola) and will be monitored for signs of infection.
5. All snake will be tested for Atrazine contamination using mass spectrometry at the conclusion of this experiment.

Snakes are amazing animals that exist on every continent except for Antarctica and are critical components of the ecosystems within which they live. Now there is a newly emerging snake fungal disease that could have catastrophic effects on wild snake populations which is why any new research on this disease is important and will help us understand how this disease could effect snakes as a whole. This money will be used to buy the water snakes since they can be very tricky to catch in the wild especially in large enough numbers to do an experiment. Also, it is better if these snakes have all had similar life histories (same environment, same food, etc) because wild snakes may have experienced different things and thus could react differently to the contaminant and the fungus. I will also need to buy the snake fungal disease culture that I will use to infect the snakes and I will be buying fish to feed the snakes. 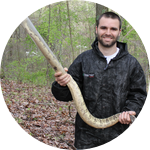 Since a young age I was interested in reptiles and amphibians so growing up I knew that I wanted to go into a field that allowed me to work in herpetology. During my time at Purdue I sought out opportunities to get herpetology related experience and ended up working for a graduate student catching hellbender salamanders (Cryptobranchus alleganiensis) and performing research on timber rattlesnakes (Crotalus horridus). Snakes are definitely near and dear to my heart so this project has great significance for me in that I hope to be a snake biologist in the future.

I am an avid photographer and obviously wildlife photography is my focus. I started out shooting mainly macro shots but have broadened to landscapes and portraits. I also like carpentry especially repurposing used materials. I love the outdoors and spend a great deal of time hiking and camping. Due to my passion for herpetology I am also a herper meaning I actively search for reptiles and amphibians to observe them in the wild.

Since before I can remember I was catching snakes, lizards, turtles, and frogs. For some reason they always fascinated me and they still do! I still go out and actively search for reptiles and amphibians and plan to work with them for my career. My other interests include nature photography, gardening, carpentry, drawing, and enjoying the outdoors. My scientific interests broadly include animal life history, field ecology, and conservation.