The presence of shell abnormalities in turtles can be an indicator of poor health. Their causes can stem from high incubation temperatures, low genetic diversity, and pollution. This project will examine the prevalence of shell abnormalities in hatchlings of the critically endangered Kemp's Ridley sea turtle at an important nesting beach in Tecolutla, Veracruz, Mexico.

Although a turtle appears healthy, the presence of shell abnormalities can indicate otherwise. Studies have shown that turtles that display these anomalies display lower fitness compared to those who do not. Thus, monitoring the prevalence of these shell abnormalities can provide a proxy to study the health of the overall population. This project will initiate a long-term study that will examine carapace (the top part of the turtle’s shell) abnormalities in hatchlings of the critically endangered Kemp’s ridley sea turtle at an important nesting beach at Tecolutla, Veracruz, Mexico.

The Kemp's ridley sea turtle went almost extinct in the 1970s and 1980s. Although it is undergoing a recovery, this species is still considered one of the most endangered sea turtles in the world. The nesting population at Tecolutla is an important population in the southern portion of the Kemp's range. This population has been protected through the immense efforts of Fernando Manzano and his local non-profit organization, Vida Milenaria. However, one of the consequences of the Kemp's ridley near extinction could be low genetic diversity, and this could be manifested in the presence of shell abnormalities in the population. Additionally, these anomalies could be caused by high incubation temperatures, which could be affected in the future by rising beach temperatures.

This project will initiate a long-term monitoring of shell abnormalities in Kemp's ridley sea turtle hatchlings in the Tecolutla nesting population.

These data will contribute to the management and conservation of this critically endangered species at an important nesting population.

Project funding will go toward purchasing project materials and supplementing the salaries of Vida Milenaria workers. Project materials will include a digital camera, which will be used to take photographs of the hatchlings for subsequent validation of shell abnormalities. Additionally, notebooks and writing instruments will be purchased. 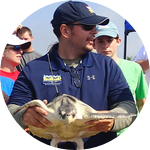 I began my career in turtle conservation and research with my Ph.D. research on diamondback terrapins in 2005. I became affiliated with the Tecolutla Turtle Preservation Project in March 2013 and traveled to Tecolutla later that year. I was very impressed with the hard work and sacrifices of Fernando Manzano and his Vida Milenaria workers for the goal of sea turtle conservation. I hope this collaboration will contribute to their great efforts and promote future protection of the Kemp's ridley sea turtle.

If you would like to more about the great sea turtle conservation efforts at Tecolutla, please visit www.saveloraturtles.org.