Gods and goddesses, gleaming temples, epic battles, heroes of legend – we’re all familiar with ancient Greece, often seen as the foundation of Western culture. But what about medieval Athens? As the so-called Dark Ages gripped the rest of Europe, the Byzantines flourished in the East. Living in the shadows of antiquity and far from the center of imperial control in Constantinople, what was life really like for the people of Byzantine Athens?

Athens’ diachronic history is often overlooked. After being absorbed into the Roman sphere in the 2nd century BC, the Byzantine Empire – Rome’s successor in the Eastern Mediterranean from the 4th century AD – ruled over Athens for 900 years. After the Fourth Crusade (1202 – 1204), Athens was controlled by Frankish lords and the Catalan Company until the Ottoman conquest in 1458. Daily life in medieval Athens remains today misunderstood, understudied, and often unpublished. Athens of the Middle Ages (ca. 400 – 1500 AD) was certainly different from its well-known Classical ‘glory days’ (5th – 4th c. BC), but nor was it an insignificant rustic backwater. Byzantine Athens was much more dynamic, creative, and independent than the history books have been suggesting.

I will work with Dr. Kondyli to draw plans and reconstructions of some of the hundreds of Byzantine houses that were excavated by the American School of Classical Studies at Athens over the last century. Architecture can speak volumes about how people live, and there is much to be discovered about the lives of ordinary Athenians across nearly a thousand years of history by studying these ruins. But most of them no longer exist – they were cleared away to allow excavators to dig deeper to access earlier levels of history. My drawings will aggregate, organize and clarify the unpublished field notes taken on these houses to accompany Dr. Kondyli's written reports. This research will enhance our understanding not only of the Middle Ages and the Byzantine world, but of Greek history as a whole.

The goal of this project is to create a portfolio of architectural illustrations in Adobe Illustrator (measured plans and reconstructions) of 3 - 10 Byzantine houses and their structural changes across all phases of their occupation. Drawings are essential here because we cannot photograph what is not there -- with research and a little imagination, however, we are able to present a possibility of what the past looked like. Drawings also have the power to transcend linguistic differences, enhancing the accessibility of this research. They express spatial and visual relationships more easily and concisely than verbal description alone. Alongside Dr. Kondyli's written reports, these images will communicate a more complete story of the houses and facilitate their discussion and study.

This budget outlines the essential costs. As I already have my supplies, the expenditures of this project are associated with traveling to and from Greece, and room and board for four weeks. This will allow me to work in the ancient Agora alongside Dr. Fotini Kondyli, an archaeologist of Byzantine social life. She is researching the remains of houses and neighborhoods to study daily life in medieval Athens, and better understand how ordinary people shaped and defined their cities and negotiated their own identities though daily activities in and around their houses. In other words, what can architecture and urban plans tell us about how ordinary people lived their lives and collaborated within their communities?

This is a vast and exciting topic that has been misunderstood, understudied, and unpublished. I will be making technical drawings to document ruins and excavated foundations, as well as reconstruction drawings of what they may originally have looked like in their own time. These plans and drawings will clearly show the sequence of construction phases for each structure, which will allow us to reconstruct the biography of these houses across the centuries. To be able to make these drawings at the site is invaluable because it will allow me to understand the geographic reality and to take into context the greater urban environment. 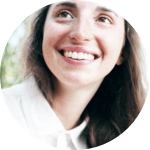 Laura Leddy is an illustrator, photographer, and
student of all things old. She graduated from Brown University in December 2013, with a double major in Archaeology and the History of Art and Architecture. She took a semester off to study at the Glasgow School of Art in Scotland. As an artist and archaeologist, Laura is especially interested in how pictures can help us see and understand the past differently from (and sometimes better than) words. In 2013, she worked in Turkey with the Brown University Labraunda Project, measuring and drawing reconstructions of collapsed ancient architecture. Laura is currently based in Florence, where she is learning Italian, sketching, and working on a children’s book.

Accessibility and clarity are at the heart of this project. I want everyone to have the chance to get to know the Byzantines and love them as much as I do. What better way than to see a picture of their world and take peek into the past? As part of this mission of accessibility, I’d like to give you all the chance to explore Athens with me – ancient, medieval and modern! I’ll keep you updated with drawings, photos, and sound bytes on my Tumblr page, Time Travel Sketchbook (which currently features snapshots and sketches of Florence – check it out!). Feel free to participate, share, and ask questions – this is a learning adventure for me and I hope it can be one for you too.