Dichanthelium consists of ~50 species in North America and is one of the most taxonomically difficult groups of grasses. They occur in every state in the US, typically in relatively undisturbed forests, so the proper identification of species within this group of grasses is of utmost importance. We will generate DNA data in order to reconstruct the evolutionary relationships among species to create a stable and objective classification system.

With over 1400 species in North America, north of Mexico, grasses are a huge component of the flora, yet they are frequently ignored.

We are studying the evolutionary history (phylogenetics) and taxonomy (species determination) of Dichanthelium, a widespread, yet poorly known group of New World grasses. The genus Dichanthelium is renowned for its difficulty in species identification, as most species are quite variable morphologically.

The overall goals of this project are to create a revised understanding of the species of Dichanthelium based on objective DNA-based relationships and to develop molecular markers (barcodes) that can be used to identify species.

Despite popular belief, we do not yet have a comprehensive understanding of species diversity in plants. Dichanthelium is the poster child for taxonomically difficult plants, even for expert taxonomists!

This group of grasses is most diverse in the southeastern US with many of those species occurring together. They are ecologically variable, occupying dry to wet communities in forests or along forest edges and can be considered indicator species of relatively undisturbed habitats. Likewise, they are threatened by habitat loss and disturbance and some species are quite rare as a result.

We will use our phylogenetic results to determine modes of speciation, as well as species limits, and the development of DNA markers will be useful for the identification of species in the group.

We want to uncover patterns of species relationships and what that tells us about their origin and distribution on ecological and geographical scales.
The funds will be used entirely for producing DNA sequences, as we have already sampled most of the North American taxa for this project (56 of 64 in the Flora of North America), as well as a number of Central and South American species. We will use Next-Gen Sequencing techniques to acquire large portions of the chloroplast and nuclear genomes to compare across species.
Determining relationships will provide us with a framework for understanding which taxa need to be recognized at the species level and would also highlight those species in need of conservation, especially in those areas under considerable threat from habitat loss.

These funds are critical for producing and understanding the intricacies of relationships within Dichanthelium, which have been very little studied from an evolutionary perspective using DNA data.

All funds will be used for procuring DNA sequence data for Dichanthelium, for the first time across the group using Next Generation Sequencing technology. With these data, a greater knowledge of species relationships (phylogeny) can be achieved than with traditional methods using only morphology.

Funds beyond the requested amount will go towards sampling more individuals and more species throughout the Americas to obtain a broader phylogenetic breadth and will certainly improve the quality of this research. 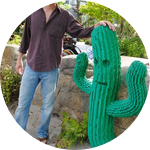 Majure is a native of Mississippi and from a very young age was exposed to the wilds of the southeastern United States. He received his Bachelors and Masters degree from Mississippi State University and his PhD from the University of Florida. His primary foci have been working to understand the evolutionary relationships of several plant groups, especially prickly pear cacti and the meadow beauty family, and documenting the flora of local regions in the SE US. http://people.biology.ufl.edu/lmajure/

Kurt Neubig grew up in south Louisiana and gained an appreciation for plants in his own back yard. He has studied at both Louisiana State University and University of Florida focusing on the evolution of various plant groups, including orchids. His goal in life is to give an appreciation of plant diversity to the people of earth and to help develop the capacity to identify all living plants using DNA data (DNA barcoding). http://people.biology.ufl.edu/kneubig/

I have always enjoyed the natural world and learning about the fascinating and complex patterns resulting from ecological, evolutionary and geological processes. I primarily focus on relationships among plants and what their evolutionary history can tell us about their distribution patterns, morphological traits and species limits. With this information, we can gain a better understanding of how certain aspects of our natural world work and potentially how to better manage our natural resources for future generations.