Two new Jurassic aged (155 million year ago) dinosaurs have been found in central Montana! These “Brontosaurus” type dinosaurs species were previously unknown to paleontologists. The scope of this project is to determine the stratigraphy, sedimentology, depositional facies, vertebrate taphonomy and paleoclimate of the Morrison Formation in central Montana. We will describe the dinosaurs and bring them back to life in their prehistoric environment.

Two previously unknown dinosaurs have been discovered in the northernmost portion of the foreland basin of the Upper Jurassic Morrison Formation. This project's aim is to place the quarries in a stratigraphic framework within the formation and to describe the depositional environment and paleoclimate in which these dinosaurs lived and died.

More than a dozen scientists from varying disciplines are collaborating to study regional structure, geochemistry, clay mineralogy, bone histology, oxygen isotopes, invertebrate paleontology (including freshwater and marine bivalves, ostracods, and charophytes), palynology and paleobotany, paleosols, and ichnology. We recognize their expertise and are grateful for their assistance and contributions.

No significant research has been done previously in the northernmost region of the Morrison Formation. In addition to the discovery of the new dinosaurs, there are several other exciting finds. Early analysis of a petrified log indicates that it is only the second representation of a genus and species in the Morrison Formation. Likewise, a petrified log from the Lower Cretaceous Kootenai Formation may be the first of its type in North America. We have many more petrified wood samples awaiting analysis. Bivalves collected this past summer may be the first representation of these species in Montana. We found the first recorded Morrison Formation tufa deposits and they may able to be dated using Ur/Pb isotope analysis. Exciting research!

Our goal is to describe the stratigraphy, sedimentology, and depositional facies of the Morrison Formation in central Montana. Each quarry will be researched to understand the vertebrate taphonomy using sedimentology and geochemistry. We will use a multifaceted approach to understand the paleoclimate for the northernmost portion of the Upper Jurassic Morrison basin.

This summer, my colleagues and I spent several weeks in central Montana doing geological field work. We are requesting donations to cover the cost of thin section preparation and oxygen isotope analysis. The sandstone thin sections will be used for petrological verification of the regional stratigraphy. The petrified wood and the bivalve thin sections will provide information about the environment and variations in the paleoclimate of the Upper Jurassic. A tufa rock sample will be sent to the University of Washington, Seattle for complex isotope analysis to provide a climatic temperature data point. We will present a portion of the research at a scientific conference this spring and summer (2017), after the analysis is complete.

I have been working with Dean on identifying fossil pollen and spores from Morrison samples from his research sites. Dean’s extensive experience in stratigraphy and paleoenvironmental analysis is exceptional and the proposed project grows out of his previous work. His study will provide the data necessary for placing these new dinosaurs in their proper ecological and climatological context as well as for comparisons with dinosaurs from the Morrison Formation to the south. 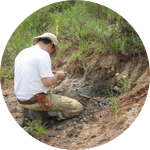 Richard Lupia
Associate Professor/Curator, Geology/Paleobotany
Geology & Sam Noble Museum, University of Oklahoma
This research project is the first comprehensive study of the Morrison Formation in the upper Jurassic in central Montana. The scope of this research is far-reaching and will add much to our understanding of this unique time period and the titanic dinosaurs that lived in it! 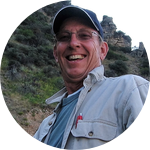 David G. Hein, Ph.D.
retired
University of Wyoming 1988
The Morrsion Formation has provided science with some of the most iconic fossils, particularly those of dinosaurs. Although much work has been done in the southern regions of this formation like Utah and Colorado, little is known about the northern reaches of this incredibly important deposit. Richmond's work is therefore incredibly important if we wish to flesh out these ancient ecosystems, and I have no doubt that he is not just qualified to carry out this research, but that he is the best person for the task. 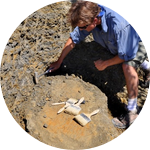 Evan Thomas Saitta
PhD candidate
University of Bristol
I really like and support this project, especially as it addresses key aspects research aspects on the Morrison Formation beyond dinosaurs, such as depositional environment and stratigraphic framework in the context of paleogeography. Owing to the intergrated approach and methodology as well as to interdisciplinary and international team of collaborators, this project will be an invaluable scientific contribution dealing with material from an area where only litte has been done thus far, both in a geographic and paleogeographic sense. 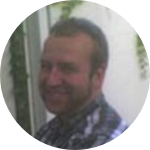 Benjamin Sames
Post-Doc Researcher, Project Leader / Micropaleontology, Stratigraphy
Department for Geodynamics and Sedimentology, University of Vienna, Austria
This is a great multi-faceted project with lots of exciting potential! It's interesting to see and hear about how geochemistry and mineralogy are being used, and I look forward to the dinosaur findings! 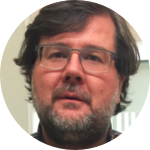 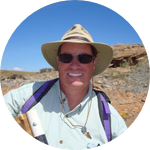 I am geologist with a passion for vertebrate paleontology, especially dinosaurs. My love for paleontology began with my father taking me fossil hunting in the Cretaceous Navesink Formation of central New Jersey. I have published papers on the vertebrate taphonomy of large and important quarries in the Upper Jurassic Morrison Formation. I have also worked with Pliocene fossil horses. While working for an oil and gas company in Billings Montana, I became aware of this research and volunteered my geologic expertise to the project. I continue to spend evenings, weekends, holidays, and personal vacation time doing original research to understand the geology of the Morrison Formation in central Montana. We plan to present our research at scientific conferences and to publish our work in peer reviewed journals.