Post traumatic stress syndrome (PTSD) is a common mental disorder in adults, especially in veterans. Despite extensive studies, we are still lacking an effective treatment. By combining genetic manipulation and environmental stress, we developed a robust PTSD model. This project aims to reveal how the changes in the synaptic morphology are implicated in the pathogenesis. We plan to develop a preventive or therapeutic strategy for PTSD.

Posttraumatic stress disorder (PTSD) is a predominant form of anxiety disorders (ADs), with a particularly high prevalent rate in returning veterans or victims of traumatic early-life bad experience such as sexual abuse, maltreatment, and neglect. Clinically, it is featured by three core symptoms, including reexperiencing of previous traumatic events, persistent avoidance/numbing, and hyperarousal. Frequent expression of these symptoms, or the comorbidity of other psychiatric entities such as depression, will dramatically disable victims’ mental life. Despite extensive studies, however, the underlying pathogenic mechanism is still not clear, nor is an effective therapy currently available. Recently clinical evidence has indicated that morphological changes in the hippocampus, a critical brain region that is essentially involved in fear response and cognition in the human, are critically involved in the development of PTSD. However, in human patients, it is very difficult to further understand how these morphological changes impact the pathogenic processing. Recently, we have developed a robust PTSD model in the mouse by combining genetic manipulation and adolescent trauma. This mouse model shows many behavioral phenotypes that resemble to symptoms of human PTSD patients. With this powerful model, we have recently further identified that a significant morphological change at the synaptic level in the hippocampus is associated with the development of behavioral phenotypes. Therefore, it is of a significant interest to further study how these morphological changes are related to behavioral abnormalities in these PTSD mice.

In this project, we will determine whether a manipulation of an endocrine system, namely CRF, in the brain during the stage of trauma exposure is able to prevent the development of PTSD-like behavior in our PTSD mouse model. In order to further elucidate the neuronal mechanism, efforts will be made on the effect of this manipulation on synaptic morphological changes in this model. Multiple experimental approaches will be employed, and the outcome from these studies will elucidate how the morphological changes in the hippocampus are involved in both the pathogenesis and therapeutic aspects. Most importantly, through these studies, we will be able to define a specific time window during which we can dramatically decrease the effect of trauma, so that we will be able to develop the paradigm that is able to prevent the development of PTSD. Once our concept is approved in our PTSD animal model, we will move to human studies, and once it is demonstrated to be effective for human subjects too, it is expected that our new strategy will have a significant impact for most PTSD patients, especially for those who have exposed to traumatic insults.

In this project, we will have the following goals:

1. We will determine in which stage, e.g. trauma exposure, post-trauma "incubation", and the expression of PTSD-like symptom, the manipulation of the CRF system in the brain effectively prevents the development of PTSD-like symptoms in these PTSD mice. We will treat mice with a CRF antagonist during the different stages as described above, and then PTSD-liek symptoms will be evaluated by using a battery of behavioral tests such as fear-conditioning, etc. It is well known that a long-term treatment with CRF antagonist will produce some side effect. Therefore, a stage-specific treatment will be most valuable for our goal to fight against PTSD. Such a goal can only be first tested in the PTSD animal models.

All the equipments that are needed for this project are available in my lab. These items include microscopy, Cryostat, Microton, and several behavioral tests. 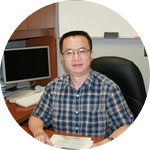 Dr. Ya-Ping Tang is an associate professor of neuroscience at LSUHSC. He earned his degree in Medicine, Pharmacology, and Neurobiology. He received his post-doctorial training in Princeton University. Dr. Tang is an expert in mouse behavioral generics, and has more than 40 publications in his research areas including neurobiology of learning and memory, mental disorder, and neurodegenerative disease. Dr. Tang has authored many publications in high impact journals, including Science, Nature, Cell, PNAS, and Neurons. Currently, Dr. Tang and his team focus on the development of a preventive and therapeutic strategy for anxiety disorders, especially for PTSD.

The research program in Dr. Tang's lab is Mouse Behavioral Genetics. The long-term goal of this program is to understand the roles of genes in cognitive processes such as learning and memory as well as the role of gene mutations int he pathogenesis of certain brain diseases with memory deficits such as Alzheimer's disease. A significant advantage in this lab is the combination of multiple disciplinary approahces including molecular biology, histology/morphology, mouse genetics, electrophysiological (collaborating with our colleagues), and mouse behavioral approaches in their studies. Moreover, the use of conditional genetic approaches int his lab allows a time-dependent and/or neuronal cell types/brain region-specific analysis of gene function at the molecular, neuronal, morphological, and behavioral levels. The analyses at these levels provide a valuable way to eventually understand how gene controls brain functions and how gene mutations contribute to brain diseases. Currently, this lab is focusing on two main research topics: neurobiology of learning and memory and neurobiology of neurodegenerative diseases.