Microplastics – small bits of plastic millimeters or smaller in size – that float in the ocean are carried by surface currents to oceanographic “dead-ends” known as subtropical ocean gyres. Yet how these particles move vertically in the water column remains poorly understood. We will carry out laboratory experiments designed to inform numerical ocean models that predict where in the water column these microplastics may be found, which may have implications for the marine animals that live there.

Floating microplastics have been documented in all five subtropical oceans, yet their abundance accounts for less than 1% of the estimated 8 million metric tons of plastic entering the oceans from land each year. Until we know where this ‘missing plastic’ resides, including the processes that transport it once it has entered the sea, we cannot accurately evaluate the risk to marine animals. Floating microplastics are measured by towing a plankton net at the sea surface, the amount collected varies depending on the wind speed. The energy from the wind mixes buoyant microplastics down to depths out of reach of the nets used to measure them. This vertical mixing must be taken into account in order to obtain robust estimates of the amount of microplastics in the near-surface ocean.

The results of this experiment will fundamentally advance our understanding of the depth distribution of microplastics in the upper ocean, leading to better predictions of microplastic concentrations.

Using wind speed and sea surface plastic concentrations, computer models can predict the amount of plastic that has been mixed to depth. A key parameter in these models is the “particle rise velocity” - the speed at which a submerged particle would rise back to the surface if released at depth. SEA has studied microplastics since 1986 with more than 11,000 plankton net samples from the Atlantic and Pacific Oceans, the largest dataset of its kind. The archived plastic samples give us the opportunity to measure the rise velocity of real-world microplastics of various forms, shapes and sizes.

In this experiment we will measure the rise velocity of individual microplastics and determine the particle characteristics that have the greatest influence on the velocity. We will utilize a ‘rise-velocity chamber’- a custom-built tube that is 2.5 meters tall, filled with artificial seawater. Individual pieces will be released at the bottom of the chamber and timed as they rise a defined distance, giving us the rise velocity.

We hypothesize that there will be distinct size, shape and/or mass characteristics that determine how deep a microplastic particle is mixed. We would like to publish this research in a scientific journal and the results will provide a critical parameter for computer models developed by Tobias Kukulka to predict the behavior of microplastics subjected to wind mixing.

The rise velocity chamber was constructed by volunteer Ethan Edson (Northeastern University, SEA Semester alum), who also carried out successful preliminary trials illustrating proof of concept. The majority of budgeted funds will support my time to run the experiments on approximately 100-150 microplastics particles collected from different depths that have previously been analyzed for polymer type, mass and size. The remaining funds will be used for supplies (Instant Ocean for artificial seawater, and spare parts for the rise velocity chamber).

Jess and Kara are at the international forefront of ocean plastic pollution research. Only very little is known about the plastic that drifts in our ocean. This project will provide key insights into how much of tiny plastic resides just below the surface of the oceans. Plastic below the surface is important, because with plastic pollution, out of sight is certainly not out of mind! Knowing how winds mix plastic around will be critical knowledge for anyone who wants to solve this grave environmental problem 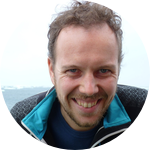 Erik van Sebille
Assistant Professor
Imperial College London
Having worked closely with Kara and Jess on getting this project started, I’m excited to see them carrying the idea to a more complete conclusion. Funding for conducting scientific research on marine microplastics, and the processes surrounding the phenomenon, is currently difficult to come by. Kara may have the best track record of any oceanographer in getting marine debris studies funded and delivering impactful results. The outcomes of this project will almost certainly go well beyond what can be expected from the Experiment funding goal. 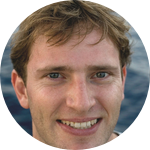 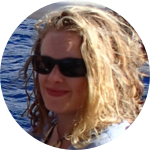 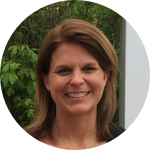 I have been a research assistant at SEA for nearly three years studying marine plastic debris from sailing research vessels and in the laboratory. In the laboratory I examine tiny microplastics to gather as much forensic information from each individual piece as possible, including the polymer type, microscopic surface features and size dimensions. This research can help us understand how these polymers behave and degrade in the marine environment, with the ultimate goals to assess their ecological impacts and to find innovative solutions to this pollution problem. I have presented my research at a number of scientific conferences and public outreach events, and this work will allow me to continue developing expertise in the field. I hold a B.S. in environmental geology from Binghamton University, a M.S. from the University of Rhode Island in environmental science/hydrogeology, and also have a background in science education and public outreach.

I am a physical oceanographer by training, and have been studying the sources, distribution, behavior and fate of plastic debris in the ocean for the past decade. In more than 12 months of sea time on oceanographic and sailing research vessels, I have witnessed first hand the accumulation of tiny microplastics, and also larger debris, in both the eastern North Pacific and western North Atlantic Oceans in the so-called “garbage patches”. My current research interests focus on the sources of plastic to the marine environment, understanding how ocean physics determines the distribution of plastic and other marine debris, and the degradation and ultimate fate of different plastic materials in the ocean. I serve as the co-principal investigator of the Marine Debris Working Group at the National Center for Ecological Analysis and Synthesis (NCEAS), and hold a Ph.D. in physical oceanography from Scripps Institution of Oceanography and a B.S. in mathematics from Duke University.