Immunological processes influence the development and vitality of every organism. The tobacco hornworm, Manduca sexta, is one such invertebrate insect whose hemocytes, which are insect blood cells, play a role in phagocytosis of foreign molecules when they encounter damaged tissue or infection. Tissue damage caused by x-ray irradiation causes developmental delay in M. sexta (Fuse Lab, unpublished data). I study these effects during wing development precursor cell regeneration.

Physiological injury via irradiation of imaginal discs causes developmental delays (Sudmeier et al., 2015) in insects that have several metamorphic life stages, such as in the fruit fly, D. melanogaster (Worley et al., 2012), and the hornworm, Manduca sexta (Fuse Lab, unpublished). X-ray irradiation is used as a tool to damage insect tissues, specifically targeting imaginal discs, which harbor highly proliferating immune cells. Immune response is altered after imaginal disc damage in fruit flies (Yan and Li, 2011), but has not yet been studied in M. sexta. Since the high doses of radiation do not impair whole organism development, our goal is to understand how the cells regenerate and help the organism further its development.

The main outcome of this study will assess the effects of radiation and infection during immune cells regeneration in M. sexta. Resolution of hemocyte response under these conditions is of great significance to better understand the immune system’s effects on tissue regeneration in the invertebrate insect system and also unravel the co-modulatory effects of hormone and immune signaling cascades that have been conserved in insects throughout evolution. Manduca is less studied as a molecular model, which would allow us to discover its physiological characteristics and qualify it as a representative of the invertebrate immune system.

MS-2 is a primary antibody that specifically labels granulocytes, a type of hemocyte that is actively present in sites of tissue damage. FITC is a green fluorophore used to tag MS-2 to distinctly visualize under the microscope and recognize via laser of the flow cytometer. MS-13 and AlexaFluor 647 work together to label plasmatocytes.

DAPI is a staining medium used to label the DNA of each cell. The dye helps to count the number of hemocytes totally present in a given sample.

Fetal Bovine Serum prevents the chosen antibodies from binding to other types of cells.

I am really excited about this research and Rachel is taking research in my lab in a very new and interesting direction. She has developed strong goals and now just needs the tools to answer these questions. She is poised to generate some very exciting data. Moreover, since Manduca does not have an acquired immune system (antibodies), her work will allow us to examine the innate immune system separate from the acquired immune system, something much harder to do in vertebrates such as humans. 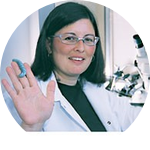 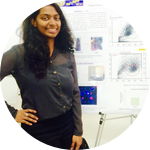 I am a graduate student in Microbiology at San Francisco State University. For my Master’s project, I have chosen to work with invertebrate model organisms to understand how immunological processes work in insects. Moreover, I am fascinated by the robust innate immune system of these insects which can survive lethal doses of radiation and even some types of infection. Outside of research, I enjoy travelling to new places, sometimes by hiking and kayaking.