The wide availability of body sensing technologies, such as Nintendo Wii and Microsoft Kinect, has the potential to bring full-body interaction to the masses.
However, the design of control gestures is still a challenge: how can we ensure that what designers have in mind is then intuitive to the users?
This project will evaluate an innovative, user-centered methodology ("Framed Guessability") for the design of controlling actions.

Traditionally, gestures have been defined by designers –but it
is hard to ensure that they are then intuitive to users. Guessability studies are an alternative approach: potential users, exposed to an effect (something that the system can do), are asked to recommend a control gesture. However, they are free to suggest unlimited (and unrelated) gestures. Yet, I believe guessability studies can still be fruitful if the theory of embodied schemata is applied. These cognitive primitives are interconnected through networks of brain circuits, creating a scaffolding of more complex structures. E.g., when thinking of the word “restaurant” one conjures up a number of connected expectations: sitting at a table, interacting with a waiter, eating, etc. This is what is commonly referred to as a frame.

If we are able to prime potential users with a frame that activates common networks of brain circuits, different participants will recommend similar (and related) gestures and body movements during a guessability study.
This will be particularly relevant in settings such as museums,
where users are not expected to already know how to use the interface and where they do not have the ability, the time, or the willingness to consult a manual that explains which gestures are recognized by the system.
Moreover, it may also be applied to the design of controlling actions for personal entertainment devices (e.g., a Kinect or a smart TV).
In conclusion, this methodology has the potential to transform the way the masses interact with full-body systems.

The entire budget will be used to compensate human subjects.

In order to evaluate this design methodology, I need to interview at least 100 people (5 groups of 20 people).
Offering a $10 compensation for each interview will allow to maximize the number of volunteers for this study.

$150+ donations: I will thank you by name in the acknowledgements of the first publication that will result from this research. 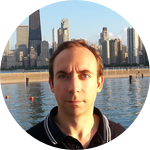 I am a Ph.D. Candidate at the University of Illinois at Chicago, and I have been a research assistant at the Learning Technology Group of the Electronic Visualization Laboratory since 2009. I earned a Master's in Computer Science from the University of Illinois at Chicago and a Master's in Engineering of Computing Systems from Politecnico di Milano (Italy).
--------------------
My research investigates how theories from psychology, design, and learning, cognitive, and computer sciences can provide the scaffolding for the design of intuitive, embodied interactions.