What are the toxic and ecological effects of marine plastic pollution to sea turtles? This research aims to combine plastic pollution and sea turtle density data to develop a risk assessment model to communicate and address the ecologic and toxic risks faced by Pacific sea turtles. Student scientists and professors will continue data collection and beach cleanups in sea turtle habitat, studying and protecting critically endangered marine life.

Dr. Pincetich has led teams of college students and professors in collaborative marine plastic pollution density monitoring in sea turtle habitat for over three years. Pacific green, leatherback, and loggerhead sea turtles are endangered, and evidence that plastic pollution is a deadly threat to their recovery is growing. The research questions to be addressed are; how does the density of plastic pollution in the Pacific ocean expose marine ecosystems to deleterious effects, and what are these effects to sea turtles and how are they likely to be observed through further field studies? The funds raised will go directly to save endangered sea turtles through cooperative scientific research and community-based beach patrolling. This is the only project of its kind collecting data collaboratively with student scientists, augmenting critical sea turtle beach defender patrols in developing countries, and making direct linkages between the actual plastic pollution plaguing sea turtle habitat, the toxic implications of ingestion of this plastic, and the application of real plastic and sea turtle density towards establishing a credible model to more effectively and accurately communicate this emerging issue.

The impact of marine plastic pollution to sea turtles has been identified as a leading cause of concern. Critical support for ongoing research teams at sea turtle nesting beaches and foraging habitats collecting plastic pollution density data is needed for the development of the ecotoxicology model proposed here. These teams also clean the beaches! This research will quantify the ecological and toxic risk of plastic to Pacific green sea turtles, and develop an open-source model to be used for other marine organisms.

Dr. Pincetich is a leading advocate for policy change to stop the decline of sea turtle species in the Pacific Ocean. The goal of the research is to fuel additional policy efforts to stop marine plastic pollution at its source! An accurate and credible risk assessment of plastic to sea turtles will provide the scientific foundation to leverage industry and government to reduce plastic production, provide for improved recycling and disposal options along coastlines in developing countries, and create new policies to limit actions that produce plastic pollution in sea turtle habitat.

The funding obtained will go directly to conducting the risk assessment calculations and supporting research teams at sea turtle nesting beaches and foraging habitats collecting plastic pollution density data that is needed for the ecotoxicology model. These teams would also clean the beaches! The budget primarily consists of the supplies and equipment needed by scientists to perform plastic pollution density surveys, travel expenses, and expenses for development of the risk assessment and it's open-source publication. 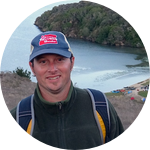 Experience
Principal investigator for Marine Debris Action Teams, a collaborative effort between Sea Turtles Forever, Turtle Trax, Project AWARE, and other non-profit partners to measure shoreline density of marine debris and plastic pollution in sea turtle nesting and foraging habitat along Pacific coasts. Dr. Pincetich has led and participated in marine research efforts along both costs of Costa Rica and in California at Hopkins Marine Laboratory and Bodega Marine Laboratory. He previously served as the President of the Society of Environmental Toxicology and Chemistry, NorCal Chapter.

Honors and Awards
Selected as an expert speaker for Plastic Pollution Coalition’s 2013 Central America tour to communicate risks of plastic pollution to sea turtles in Panama and Guatemala for the public and popular media.

Dr. Chris Pincetich works tirelessly to achieve sea turtle and ocean conservation policy advancement through science, advocacy, and sharing his passion in lectures to international scientific conferences, universities, and public groups. Chris has a doctorate in Environmental Toxicology from the University of California, Davis and a B.S. in Marine Biology from University of California, Santa Cruz. Studying marine debris on shorelines and in marine endangered species habitats and using those experiences to advance the science and policies needed to effectively reduce marine debris sources and prevent harmful plastic pollution impacts is the focus of Chris' current work.

It’s early on a weekday morning, and Chris Pincetich is sifting through a small pile of debris on Stinson Beach. He’s at the high-water mark, called the wrack line. That’s where buoyant ocean flotsam gets stuck as the tide goes out. As we walk along, he stops and points out how plastic strapping looks a lot like weathered eelgrass. Pincetich isn’t your ordinary beachcomber. He’s a scientist trying to compile a local data set for a global problem: marine plastic pollution.

“Usually I just sort of shuffle through the wrack line,” Pincetich says. Today, though, he’s busy training Kari Gehrke, a San Francisco State University student on her way to an internship in Costa Rica. She’ll be working with a sea turtle conservation group there and, on the side, doing some beach plastic surveys. Along with Gehrke, 10 freshmen from the Marin School of Environmental Leadership will be meeting here to learn how to do plastic surveys.

A year ago, Pincetich started monitor-ing plastic pollution on six beaches at Point Reyes. He set up transects, or measured grids, that he visits regularly to collect data before carting away marine debris. Since he started the study, he’s recorded more than 4,000 items of plastic on Point Reyes’s remote beaches. The goal, Pincetich says, is to document the density and type of local plastic pollution and then use that data to inform larger conservation efforts.

Pincetich started cleaning beaches with environmental groups like Surfrider as a kid. In college he majored in marine biology and studied pesticide runoff’s effects on salmon for his doctorate. He worked at water quality labs but missed the beach. So four years ago, he joined the Turtle Island Restoration Network to work on sea turtle conservation.

“The nexus of toxicology and sea turtle conservation is plastic pollution,” Pincetich says. Sea turtles, including leatherbacks that migrate just offshore, forage near the ocean’s surface and are especially susceptible to ingesting or getting tangled in floating plastic.

Pincetech sets up his transect by measuring 100 meters parallel to the water and then recording debris at four points along that line. Once established, the starting point is always the same for each beach, but the sampling interval along the 100-meter transect will vary, at random. “When you are doing ecological transects you don’t just do the hot spots; you try to be objective and look at the whole area,” Pincetich says.

His goal is to understand what kinds of plastic items wash up on local beaches and where they come from, whether local sources or the global marine plastic mix. So far the study is revealing useful insights; for instance, shotgun shell casings (presumably from duck hunters) are among the most common plastics found on Bay Area beaches.

Early on, Pincetich realized that plastics don’t wash ashore randomly– deposition varies by location and season. “In the spring in Drakes Bay you can go to the beach and see plastic confetti everywhere,” he says. “In the summer, the current shifts and you don’t see the confetti as much.” That knowledge could help groups schedule beach cleanups when they’ll have the most impact.

Pincetich envisions a time when communities up and down the West Coast survey beaches to create a full picture of the marine plastics problem. “Ideally, millions of people would be doing this,” he says. But for now, and with the help of two interns, he’s sifting through a year of data and posting it at seaturtles.org. “The idea behind the survey,” he says, “is to go beyond the anecdotal stories and the graphic photos and use comparable data to paint a real picture of the plastics problem.”