I hypothesize that the human brain is capable of receiving radio frequency transmissions and decoding them on a neurological level. I experienced a phenomena where I was next to a radio, had a song pop into my head, and then turned on the radio and the same song was playing. I followed up with a poll asking participants if they had experienced this and 87% answered yes. I plan to test this hypothesis by bringing 50 people into the lab to see if these results are reproducible.

One day, while pulling out of the parking lot at my University, I began to sing a song. It was an older song not commonly played on the radio. I turned on the radio and the song I had been singing was on. It took me a few seconds to realize what had happened, and then I began to think about it. How or why did I think of that song, at that moment, as it was playing on the radio before I knew it was playing on the radio? Visual and auditory perception are all based on frequencies. Everything we see and hear falls in a frequency range. This range is relatively small compared to the full scale of frequencies available. What if we do pick up those frequencies just not with our known senses. What if the neurons in our brain are capable of deciphering those frequencies?

Previous research has focused on what effect brainwaves may have on other frequencies, which was concluded to be none due to their lack of strength. Brainwaves have a range of .5Hz to 30 Hz, which falls into radio frequency bands 4, 5 and some of 6. That is what is broadcasted, but what if our brain also acts as an antenna, and can decipher higher frequencies. Our brains are constantly bombarded with stimuli, and they are good at organizing it into what is important. It is not all that farfetched that they are also capable of intercepting passing radio frequencies.

We hypothesize that we can identify these frequencies that human brains can decode as well as the structures used to decode them.

We hypothesize that the human brain is capable of receiving radio frequency transmissions and decoding on a neurological level. What we would like to know specifically is what frequencies and which brain structures are involved. We will set up an RF generator at one end of the lab and calibrate it to a specific frequency, then transmit to a receiver on the other end. The receiver will be muted so no actual sound can be heard. The participant will be wearing an EEG cap, and brainwave info will be collected. The participant will write down any words that pop into their head for five minutes. We will see if the participant wrote down the correct word, and at what time, and compare it to the EEG data and current broadcasted frequency. We are aiming for 50 participants of varied demographics.

The equipment needed will be a shortwave radio frequency generator, EEG equipment with electrodes to measure brain activity as RF passes over the participant. I will also need software to obtain data (superlabs) and materials to deflect outside RF radiation. I intend to compensate participants with a $20 gift card for their time which will not exceed 30 minutes (25 min set up, 5 min runtime).

Matt is extremely hard working and does everything he can to make sure he puts out nothing but quality work. He is very dedicated to his field and it is clear that he is very passionate about his work. I look forward to seeing him make great contributions to the scientific community! 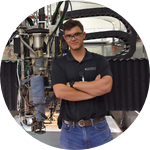 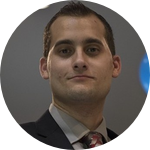 Researcher in multiple psychology labs at the Rochester Institute of Technology. Finishing Undergrad with plans to continue in a Ph. D. program. Main focus of study is cognitive psychology. Interested in running new experiments, and data analysis. Interested in clinical psychology as well and helping veterans with PTSD.

We will control for outside frequencies and "noise" to ensure the information that is being decoded is being generated by us.

50 Participants should be enough to collect data for a statistically significant result, if the hypothesis can be supported. I also will be looking at demographic data to see there are any patterns.