Our goal is to measure the effect of coastal light pollution on hatchling loggerhead ability to find the ocean. We hypothesize that there will be a threshold intensity above which hatchlings become disoriented and less efficient at "sea finding".

Artificial light is a pollutant which is increasing in U.S. urban environments at a rate of 6% per year. Determining hatchling response to various light levels will be important to the long term conservation strategies for endangered sea turtle species.

In coastal marine settings, it has been well established that light sources have the ability to alter the path of both nesting female and hatchling sea turtles. Hatchling sea turtles respond strongly to light stimuli upon immediate departure from their nest, and show sensitivity to wavelength, intensity, and directionality characteristics of that source (Lutz and Musick, 1993, Salmon 2003). Nesting females prefer dark for nesting and will often nest in front of shade casting "tall objects" in well developed coastlines (Salmon et al., 1995, salmon 2003). The potential for future threats from light disorientation were well expressed by Cinzano et al., (2001), who found that coastal light intensity "urban glow" associated with US coastlines were increasing at a rate of 6% per year.

Intense interest in artificial light source impacts have developed in nesting areas along the eastern Florida coast with heavy beachfront development, after observations of increasing large scale hatchling disorientation. The urban pollution levels in these regions of the state may be increasing within the near future in the Myrtle Beach region of our state. Documenting the contemporary influence of light, especially with regard to thresholds and current ranges could be useful to the state regarding conservation planning for Loggerheads. Importantly, because turtles have temperature-dependent sex determination, loggerhead hatchlings in South Carolina represent a significant proportion of the male turtles supporting the entire Southeastern US population.

Knowledge of light levels obtained from point source light measurements and satellite imagery data collected over the last two years will be used to study hatchling movements. Our goal is measure hatchling track characteristics from low, moderate, high, and very high light intensity areas within our study boundaries. Data will be collected from 20 nests, with individual hatchling tracks characterized by; direction (bearing), speed, and path variability (sinuosity). This data will be collected during the emergence from nests using a motion activated (non-luminated) IR video camera system. Frame by frame hatchling track information will be quantified using GIS ARC info software.

The funding requested for this project exceeds that normally available to undergraduate students doing independent research, attending small state liberal arts institutions. At our university support is typically $200-$400 per student. Two video camera systems (including commercially available night security, motion activated camera packages, batteries and power inverters) are budgeted allowing two teams to be operating to collect data on the same nights. The project will benefit from numerous other student volunteers that are undergraduates in the Marine Science department and / or members of the campus sea turtle club. Any funds in excess of that requested in the budget will be used to cover travel costs for the many students involved in the project. Donations may be subject to the Freedom of Information Act or Public Disclosure.

I am really excited about this project, which will tackle some critical questions for the conservation and management of sea turtles. 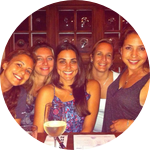 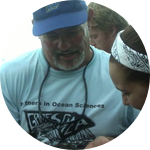 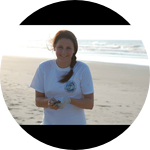 Dr. Koepfler is a Professor in the Department of Marine Science at Coastal Carolina University. He was a past president of the Southeastern Estuarine Research Society (SEERS), and a governing board & education committee member for Coastal and Estuarine Research Federation (CERF). In addition to SEERS and CERF he is a continuing member of the American Association for the Advancement of Science (AAAS), and the International Sea Turtle Society (ISTS). Dr. Koepfler has served as a research mentor to over 200 undergraduate students, and a research advisor to 24 graduate students.

Dr. Koepfler's research interests in Marine Biology are broad and regarding Sea Turtle biology he is interested in thermal effects on adult female nesting cues, hatchling development, and survival; as well as the influence of light and currents upon hatchling orientation.

Taylor Harris is currently a senior at Coastal Carolina University, studying in marine science. She is originally from Oklahoma and came to Coastal because of their marine science program and to play collegiate softball. From the day she moved to South Carolina she has had a love for sea turtles. She volunteers on a sea turtle patrol at Waties Island, SC every year during nesting and hatching season. She is also a member and was on the executive board for the Coastal Sea Turtle Club. Through this project she hopes to gain experience working in research for graduate school and hopefully help as many sea turtle hatchlings as possible.

Report from the Coastal Observer on the project research and funding campaignRead our story and watch the TV coverage of our project in the local Carolina news!

Video of hatchling emergence from nest in the Florida Keys using camera technology similar to our proposed use (included in video above). Our camera will be placed overhead looking downwards roughly 4m high centered over each surveyed nest.