The marvelous coloration patterns on butterflies are due to the presence of scales-modified hairs which are secreted by single cells. Amazingly, many other groups of insects also have evolved scales. Weevils, one of the largest families of animals on the planet (over 60,000 species), are another insect group to possess scales. In order to understand how similar structures have evolved independently in different organisms, this study will compare scale development in weevils and butterflies.

This study is intended to serve as the basis of a larger, long-term project examining scale development in different insect lineages and understanding how these independent evolutionary events occurred.

Research on insect scales has focused primarily on butterflies, in which much progress has been made to understand scale structure and morphology (1-3), wing color pattern formation (4-5), and development (6-7). Some work also has been accomplished examining weevil scale structure (8), although much progress is being made here (Davis and DeMarr, unpublished data). New frontiers in scale research, including this study, will involve comparative work on the morphology between different lineages of insects possessing scales and their developmental mechanisms.

Weevils are a kind of beetle and feed on numerous types of plants, which is why they also are pests of many agricultural crops (e.g., corn, wheat, coffee, oranges, etc.). A common example includes acorn weevils.

Scale structure and formation is a fascinating topic not only due to their beauty and structural complexity, in which single cells are able to produce diverse patterns, but because of their ability to reflect and generate such diverse colors (9), sparking great interest in the fields of bioengineering and nanotechnology. With regards to evolutionary and developmental biology, it is of great interest to comprehend how genes are expressed to form such anatomical features, as well as how divergent lineages of organisms have independently evolved complex features such as scales and why.

This project represents the beginning of a long-term research program, having goals that include genome sequencing to look at regulatory regions governing the expression patterns of scale-related genes. In this study, in order to better understand which genes are being expressed in a scale cell to produce its specific structure, deep DNA sequencing will be done of various developmental stages in the weevil during which the scales are forming. To characterize the formation of the scales, transmission electron microscope (TEM) imaging will be done of these various stages. ImmunoGold labeling, a technique allowing one to stain and visualize specific proteins using the TEM, will also be done to understand how some proteins are being arranged spatially within the scale cell during development.

Funding for this project will serve as the basis of a larger, long-term project examining scale development in different insect lineages and understanding how these independent evolutionary events occurred. Long-term goals will include genome sequencing to look at regulatory regions governing the expression patterns of scale-related genes.

The funds for this study include DNA (transcriptome) sequencing to get an overall picture of the different genes being expressed to control scale development in weevils. The ImmunoGold kit staining and NanoGold labeling is to tag specific proteins/DNA expressed during scale development and to visualize the expression pattern via imaging with the Transmission Electron Microscope (TEM). Finally, various supplies are needed for TEM imaging, such as epoxy for sample embedding, copper grids for sample mounting, and various stains.

The natural world is filled with a diversity of colors and patterns, but how are these generated? The astonishing variety of weevil scales provide an elegant and tractable system to explore this problem at the cellular level. As for the guy behind the project, there may be no biologist more insightful, dedicated and technically gifted than Steve Davis. 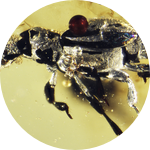 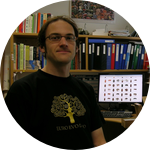 My research centers in weevil (Curculionoidea) systematics, exploring the morphology, patterning, and evolutionary development of these remarkably diverse and curious beetles.

While my interests are strongly nested within comparative morphology and weevil systematics, I desire to employ a broad range of tools in evolutionary biology to better understand the taxonomy, classification, and evolution of one of the largest radiations in the tree of life.

Emanating from my interest in insect anatomy, and as a result of conducting taxonomic and phylogenetic studies in weevils (and other insects), I became fascinated with the developmental evolution driving the present and past morphological diversity in these organisms. Consequently, I have been integrating techniques of evolutionary development and developmental biology to better understand the genetic basis of morphological structure and evolution. I began by exploring the development and patterning of the weevil rostrum, a feature of this group which is believed to represent a key evolutionary innovation permitting them to undergo a spectacular radiation. Current and future work includes understanding the specific functions of these genes, their expression patterns, and determine the utility of such developmental data in a comparative phylogenetic context.

Acknowledgements: Much preliminary research for this project also has been collected through a collaboration with Kyle DeMarr, currently an Entomology undergraduate at Cornell University. Partial funding for this preliminary research came from a National Science Foundation Research Experiences for Undergraduates program and a Kalbfleisch and Gerstner Fellowship through the American Museum of Natural History.