Lionfish, an invasive predatory fish from the Indo-Pacific, have been altering the native reef fishes communities on coral reefs throughout the Caribbean for the past decade. In Panama, recreational divers with the Clear This Fish Foundation have been removing lionfish from reefs near Portobelo since 2009.

Our goal is to measure the success of these efforts by scientifically evaluating native fish biomass on reefs cleared of lionfish compared to nearby reefs where the lionfish remain.

Since 2009, the Clear This Fish Foundation (CTFF) has been conducting a lionfish removal program in Portobelo, Panama. Thanks to their efforts, the dive operators in the area report a staggering recovery of the native fish populations. They claim that there is a huge difference between the reefs where Foundation divers hunt for lionfish and nearby reefs where the lionfish remain.

Clearly, the CTFF is having a big effect on the health of the local coral reefs, at least according to the divers who dive regularly in the area. However, we want to verify, scientifically, that this is the case so we can expand this model out to other areas where lionfish have invaded - all that is needed are divers that care about the health of their coral reefs!

The invasion of non-native lionfish into the Caribbean Sea is one of the most important marine conservation issues facing the area. Lionfish are voracious predators that consume native reef fishes and alter the native fish communities on coral reefs, which has cascading effects on the health of the reefs.

Diver removals of lionfish may be one of the only sustainable methods for controlling this invasion. We hope to show that even a modest effort by local recreational divers can significantly improve the health of the coral reef fish communities. If successful, this model can be applied to other areas in the Caribbean where the lionfish have invaded.

The goals of our project are two-fold: first, we will conduct a scientific expedition to assess the efficacy of the Clear This Fish Foundation's lionfish removal efforts. Two scientific divers will travel from Miami to Panama to dive with CTFF divers and conduct scientific surveys to measure the health of the coral reefs and native reef fishes where CTFF divers have hunted lionfish. Results of the expedition will be shared on social media and written up for publication in a scientific journal.

Our primary goal is to fund a Research Expedition to Portobelo, Panama. Sometime late 2016 two lionfish researchers from the US will travel to Panama to conduct scientific surveys to measure the health of the coral reefs and the native reef fish communities. Approximate costs for the survey expedition include airfare @ $500 per scientist, lodging @ $500 for 7 nights at the dive station, and 5 days of diving @ $200 per day; total cost for the survey expedition = $2500.

Once we meet our Expedition goal, we have a stretch goal of $1000 to help support the Clear This Fish Foundation in their efforts to educate local divers and continue removing lionfish from the reefs. Each day of lionfish hunting costs $100 per diver to cover air fills, boat rental, and fuel, so 10 days of lionfish removal = $1000. All diving operations are conducted out of Dive Adventure Panama in Portobelo, Panama. Any funds raised above the requested amount will fund more lionfish hunting trips through the CTFF.

Dr. Ellis has expertise in reef fish ecology and has been my colleague for over five years. The proposed research will greatly improve our understanding of whether lionfish removal efforts conducted by recreational divers can serve as a form of control on the populations of this highly destructive invasive species. 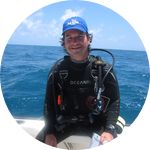 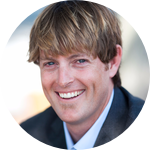 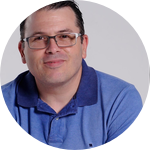 The Clear This Fish Foundation was started in 2009 to educate coastal communities and local stakeholders about the lionfish invasion and to support efforts to remove the invasive species from coral reefs in Panama.

I am a marine ecologist interested in the natural and anthropogenic forces that shape fish communities. I study the factors that regulate biodiversity in the oceans by looking closely at the fish, invertebrate, and infaunal species that make up marine communities, and by measuring the forces that change these communities over time. These forces include invasive species, like lionfish.

In 2015 I traveled to Panama for a scientific conference about the lionfish invasion where I met Gabriel and learned about the CTFF. Gabriel invited me to go diving with him and see firsthand the effect that the Foundation has had on the health of the local reefs. Since then I have been working with the CTFF as a scientific advisor.

PADI Divemaster, founder and Director of the Clear This Fish Foundation. Graphic Designer and Advertising and Social Media Professional.

I've been involved in this lionfish trouble ever since I started to notice the amount of lionfish wherever I went diving in the Caribbean. I love the biodiversity of our waters in Panama and with a group of divers decided to start hunting lionfish during our recreational dives.

Since then I've been teaching people and coastal communities how to manage the fish in and out of the water, how to clean the fish and take advantage of this wonderful source of protein. That's the main goal of the CTFF and it has been working very well. But we need more support and funds to spread the word to more people and that need resources!

Please help us show other Caribbean countries how to reduce the impact of lionfish through recreational Scuba diving to protect the local species and the way of life of the coastal communities.

5 Lab Notes Posted
Another chance to help
Counting down the days
We think they can!

Find out more about the Clear This Fish Foundation here.