Flight calls are poorly understood vocalizations given by migrating warblers (Parulidae) that are thought to maintain flock unity. Calls vary between species but the exact role in communication between and among species is unknown. I propose to understand the function of flight calls by aurally and visually recording warbler migration. I will test if calls function in communication between members of the same species or mixed species flocks.

The evolutionary pressures shaping the migratory behaviors of songbirds (Passeriformes) remain poorly studied. Most attention has been directed to the study of nocturnal migration of songbirds when migration normally occurs. Little attention has been given to the study of diurnal migration, which is at odds with the conventional research on why songbirds migrate at night. I propose to study wood-warbler behavior using flight calls, short species-specific vocalizations that are poorly understood, but thought to maintain flock unity. Little research has been conducted on flight calling behavior and in particular this research represents an outstanding opportunity to investigate the evolution of aural communication during migration that is mutually intelligible across multiple species.

Studying the evolutionary incentives of flight calling behavior during diurnal migration offers a tremendous opportunity for elucidating the roles calls play in maintaining migratory flocks and the differences in this behavior among species. Traditional studies of songbird migration make use of nocturnal flight call recordings, as opposed to rarer diurnal flights. Farnsworth (2005) reviewed the effect of atmospheric conditions on migration, but little research has been conducted on species specific patterns of flight calling behavior. The advantage of using diurnal flights as opposed to the traditional study of nocturnal migration is that patterns of flight calls recorded aurally can be confirmed visually. Research on the behavioral function of flight-calls is lacking.

We will focus on the function of flight calls. I propose that flight calls among wood-warblers during migration have evolved to be transmissible according to species-specific differences in flocking behavior. To test this, I will collect audio recordings and visual counts of migrating warblers at a massive migration site in the Keweenaw Peninsula during spring 2017. From this I will look for patterns in flock composition, abundance and acoustic properties of each species to determine if call rates vary with the number of individuals per species within flocks. I will test if more calls are uttered as the proportion of conspecifics in flocks increases and how this applies to single species vs. multi-species flocks. I will compare trends in a phylogenetic context.

The purchase of equipment for recording flight calls of migrating warblers will be essential for determining the call frequency and flock composition of birds overhead. I will locate two recording units at our migration site to capture as many migrants as possible. I will need to record birds visually with tablet recording software and later process spectral characteristics of flight calls using sonogram analysis software. In addition, transportation via boat to this remote count site is expensive and will require camping in harsh conditions near Lake Superior. No salary or personal expenses (per diem, etc.) are included in this budget. All budget items are for necessary equipment and supplies for field recording and transport.

Zach is a former graduate student of mine who has demonstrated a strong ability for the study of birds and evolution. This project is interesting because it seeks to understand the function of flight calls--poorly understood vocalizations—and their role in communication between migrating warblers. I am eager to see what Zach finds as little work has been done on the evolution of vocalizations during migration. 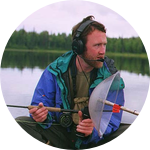 Alec Lindsay
Professor
Northern Michigan University
Zach’s research on the migration of warblers has documented a huge migration pathway down the Keweenaw Peninsula of Michigan. This has given him the opportunity to study how these birds communicate in flocks and what drives their migrations along Lake Superior, which has never been studied before. Zach has an extensive background in both ornithology, and bird identification, making him ideally suited for this work. 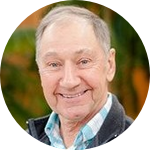 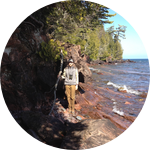 Since the age of ten, I have been fascinated by the range of colors, foraging strategies, and behaviors of birds and I haven’t outgrown this interest to this day. In all of my work--from the evolutionary genomics of loons, diversification of tropical birds, and niche partitioning among chickadees--I have maintained an interest in understanding how interactions between species and their environment influence adaptation and drive biodiversity accumulation in birds.

After completing my Master's degree in genomics, I am currently working with Copper Country Audubon to study warbler migration while I determine where I'd like to go for a PhD.