Nudibranchs are charismatic marine invertebrates whose vibrant colors appear strikingly exposed and vulnerable while secretly harboring a nasty punch of distasteful chemicals. I use vision models to ‘see through the eyes of fish’ to find which nudibranchs are most visible to predators and chemical ‘taste tests’ to see which are most distasteful. I then use this info to make comparisons amongst species and test evolutionary theories.

Project Background
Aposematic animals use conspicuous color patterns to promote avoidance learning in predators. These eye-catching color displays are regularly associated with defended prey because the cost of conspicuousness is thought to be too great for undefended individuals (Ruxton, Sherratt et al. 2004). Nudibranchs often have bright body patterns that appear strikingly exposed to predation, yet they are generally avoided by most predators (Edmunds 1987; Rudman 1991). Many of these soft-bodied sea slugs have evolved to sequester secondary metabolites from dietary sources, which they then use as chemical deterrents (Thompson 1960; Karuso 1987; Avila 1995). Other nudibranchs have cryptic color patterns or camouflage to blend into their surroundings, opting to avoid detection altogether rather than promote predator recognition (Rudman 1991; Cortesi and Cheney 2010). This variation in predator avoidance strategies makes nudibranchs an ideal model system to test theories about the evolution of aposematism. However, poor resolution in nudibranch phylogenies currently hinders our ability to test such theories.

Project Methods
I will photograph and collect nudibranchs from the reef and transport them to the lab for processing. Spectral reflectance of colour patches will be measured using a spectrophotometer. These measurements will then be analyzed using the Vorobyev Osorio predator vision model to estimate conspicuousness from the perspective of a reef fish predator. Photographs will be analyzed using 1st and 2nd order image statistics to determine how the brightness contrast and spatial frequency of the pattern compares to the nudibranch’s natural background. Tissue samples will be collected for DNA sequencing to be used in population genetic and phylogenetic analyses. Next, I will extract secondary metabolites from nudibranch tissue. The chemical content and molecular structure of each extract will be determined using analytical tools such as H NMR, HPLC, and chemical databases. I will then prepare artificial pellets containing nudibranch extracts at varying concentrations and feed these picaso triggerfish and pufferfish in order to assess the relative deterrence of nudibranch chemicals to these generalist reef predators.

Marine organisms, in particular molluscs, are an important source of diverse natural products, and investigations into their biological and chemical properties have lead to the discovery of many biologically potent chemicals with FDA approval due to their analgesic, anti-inflammatory, antiviral and anticancer activity (Gerwick and Moore, 2012). For example, investigations into the conotoxin venom from fish-hunting cone shells (genus Conus) resulted in drugs being developed to manage severe and chronic pain (Molinski et al 2009). The antitumour depsipeptide Kahalalide F was also isolated from the opisthobranch mollusc Elysia rufescens, which is used by both the mollusc and its dietary alga Bryopsis spp. (the true source of Kahalalide F) as a chemical defense from predation. Kahalalide F is currently in clinical trials for the treatment of advanced cancerous tumors, including those related to melanoma (Salazar et al 2013). Whilst many natural products are too rare to be collected in large quantities for the pharmaceutical industry, they may act as lead compounds that can be precursors for synthetic compounds. However, the identity and level of chemical defense is known for less than <1% of all mollusc species. This research will aid in the discovery of novel compounds, while also helping put such chemicals into a natural context so that we can understand their ecological function and evolution.

Also, While nudibranchs are widely theorized to be aposematic, little evidence is available to link unpalatability to conspicuousness, mostly for lack of quantitative pattern measurements. To my knowledge, the combination of unpalatability assays and predator vision models have not yet been used to examine aposematic traits in the marine environment. With this new level of understanding, I will be able to inform and shape future theoretical models, which will be applicable to a range of ecological and evolutionary processes. These findings will be pertinent to variety of organisms ...including us!

All donors will receive regular lab notes along the way. Donations over $20 will be posted a nudibranch thank you card (see lab note for details). Upon completion, this research will be published in my thesis as well as peer reviewed journals. Those who donate $200 or more will be personally recognized in the acknowledgements section of relevant publications.

This project is already underway! I have been busy diving for nudibranchs, measuring colors, extracting chemicals, and performing assays. Now it is time to see how all of these measurements relate to each other. In order do this, I must perform DNA extractions for population genetic and phylogenetic analysis.

Funds will cover the cost of DNA extractions and PCR for the samples I have collected.

Stretch funds will be put towards travel and accommodation at the Western Australian Museum, where I will use facilities and work with Dr. Nerida Wilson.

Anne Winters is a dedicated and enterprising student who is carrying out a really fascinating project. I am really looking forward to her coming to learn DNA sequencing; it will fulfil an important facet of her project. I have spent time with Anne in the field and having seen her work first hand, I am positive that her project will result in high quality science. 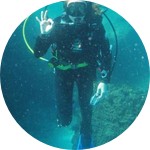 I am a PhD student at the University of Queensland. Over the next three years I will be collecting data on the conspicuous color patterns and defensive chemicals of nudibranchs. This is an exciting project that will take me diving into Australia’s oceans to explore the diverse and beautiful adaptations of some of the world’s most vibrant creatures. During this time I am keen to communicate my findings by publishing in leading international peer reviewed journals, presenting seminars at national/international conferences, and sharing my research with you!

A History Lesson...
Alfred Russel Wallace was the first to suggest the use of visual warning signals in response to a letter from Charles Darwin in 1866. Darwin’s letter recognized that conspicuous colouring in early life stages could not be explained by his theory of sexual selection, as immature life stages are not sexually active. Wallace suggested that the bright colours of a caterpillar might instead warn of its unpalatability, just as a hornet’s contrasting black and yellow bands warn of its defensive sting. The first evidence of this theory was provided through John Weir’s experiments using captive caterpillars and birds (Weir 1870). Edward Poulton later termed such colouration as aposematic (apo, away; sematic; sign) in a chart classifying the functions of animal colours in 1890 (Poulton 1890). Most of these names such as epigamic (courtship colours) and episematic (recognition markings) are no longer in use, but the terms crypsis and aposematism remain. The meaning of aposematism, as defined by Poulton, is ‘an appearance which warns off enemies because it denotes something unpleasant or dangerous; or which directs the attention of an enemy to some specially defended or merely non-vital part; or which warns off other individuals of the same species. Poulton further expanded aposematic theory by linking aposematism to certain traits, such as the contrast of a prey’s colours against their natural background, possession of two or more contrasting colours within a prey’s pattern, and conspicuous or sluggish behaviours. Poulton was the first to find evidence of a correlation between conspicuousness and unpalatability of prey to selected predators, and proposed that this enhanced predator learning (Poulton 1887).

More about nudibranchs...
Many molluscs protect themselves from predation by secreting a hard shell into which they can withdraw in case of attack. However, this mechanical protection is often insufficient against predators, many of which have evolved to overcome this form of defense. Nudibranchs are a diverse group of molluscs, with over 3000 species found in marine habitats all over the world. Lacking the protective shell of their ancestors (Wägele and Klussmann-Kolb 2005), these soft- bodied sea slugs appear strikingly exposed to predation, yet are generally avoided by most predators (Edmunds 1987; Rudman 1991). Rather than rely on the mechanical defense of a shell, nudibranchs have evolved to sequester secondary metabolites from dietary sources, which they then use as chemical deterrents (Thompson 1960; Karuso 1987; Avila 1995). In most nudibranchs the shell is reduced or absent, leaving chemical deterrence as the primary form of defense (Thompson 1960; Wägele and Klussmann-Kolb 2005). These chemicals are found in especially high concentrations in specialized mantle dermal formations (MDFs), which are located in exposed and non-vital portions of the animal (Thompson 1960; Avila, Cimino et al. 1991). Therefore, if a predator were to ‘taste’ a nudibranch, it would encounter an especially high concentration of distasteful chemicals while inflicting relatively little harm to the non-vital mantle regions of its prey. Other defenses incorporated by some nudibranchs include stinging nematocysts, mucus secretions, and autotomy. As well as secondary defenses, many nudibranchs also have vibrant and conspicuous colour patterns. Similar to Darwin’s conspicuous larvae conundrum, these colors cannot be explained by sexual selection or individual recognition as the simple eyespots of nudibranchs are unable to distinguish colors or form images. Instead, it is likely that these color patterns act as a signal to warn visually hunting predators of the nudibranch’s chemical defenses. Consistent with Poulton’s description of aposematism, these warning signals draw the predator’s attention to especially well defended, and non-vital portions of the mantle. Other nudibranchs have cryptic color patterns or camouflage to blend into their surroundings, opting to avoid detection altogether rather than promote predator recognition and avoidance. This variation in predator avoidance strategies makes nudibranchs an ideal model system to test theories about the evolution of aposematism (Thompson 1960; Faulkner, J. et al. 1983; Rudman 1991).