The genus Sarracenia, carnivorous pitcher plants native to North America, presents a long-standing evolutionary puzzle. While their ecology and morphology exemplify a carnivorous lifestyle, it is unknown how these plants obtain the enzymes necessary for digestion. Current research seeks to identify digestive genes in the plant genome, but the pitcher's microbial community is likely essential. Added transcriptomics will allow the untangling of vital plant-microbe interactions.

For my dissertation, I'm studying the evolution of digestion in Sarracenia alata, including genetic novelty and microbial symbioses. The Carstens Lab has already invested heavily in the genomic aspects of this project, with a large amount of PacBio SMRT and BioNano Irys sequence data arriving in January. This data will allow us to determine the genes in Sarracenia that play a role in the digestive process, as well as their likely evolutionary history. Studies in other carnivorous plants such as Dionaea muscipula (Venus's Flytrap) suggest that digestive processes are developed by co-opting existing pathways such as immune response, but as carnivory has a number of independent origins in plants, different genes with different histories are likely involved in different lineages.

With such a large amount of Sarracenia sequence data in hand, I am uniquely positioned to answer a question has been debated by carnivorous plant growers and researchers for decades: how do the contributions of the fluid bacterial community compare to those of the host plant in Sarracenia pitchers? It is well-established that the fluid inside the leaf traps of S. alata hosts a wide range of bacterial species, but whether they are primarily mutualistic, commensal, or parasitic is unknown. At the most extreme, it has been suggested that the pitchers may not perform any digestion at all, merely serving as a reservoir for bacteria that perform all the necessary processes. This long-standing question has deeper significance, addressing how symbioses may allow novel functions to evolve.

For this project, we first intend to collect trap fluid from multiple wild populations of Sarracenia alata, to account for possible variation across its range. Then, the transcriptome of each population will be sequenced, including transcripts from the plant as well as those from the microbial community. Transcripts can be compared to the sequenced S. alata genome using nucleotide BLAST to determine which originate from the plant itself. Remaining sequences will be searched against a bacterial database to identify those of likely bacterial origin (with those that remain unidentifiable or of other origin removed). Finally, plant and bacterial sequences will be matched with a likely function using BLASTX (nucleotide-to-protein) and further gene ontogeny analyses.

The first step in evaluating this question is the collection of digestive fluid samples from wild populations of Sarracenia alata. To save on travel costs, sampling will be performed by associates located close to the field sites. As we are interested in the RNA transcripts in the fluid and these molecules are very unstable, they must be preserved in RNALater, a stabilizing solution. This makes it possible to ship fluids at room temperature without degradation of genetic information. Costs include RNALater, Falcon collecting tubes, and shipping costs.

Fluid samples will be combined for each population collected and sent to RTL Genomics for extraction and sequencing. High-quality transcriptomic data will be obtained using Illumina HiSeq. Costs include all sampling cleaning/preparation, extraction, and sequencing.

All analyses will be performed using the Ohio Supercomputer Center's cluster resources, provided at no additional cost.

Greg Wheeler, with his combination of excellent bioinformatics skills and passion for carnivorous plants is an ideal scientist to conduct this work. If funded, the data generated as part of this project promises to provide vital information about the digestive enzymes that are used by Sarracenia alata to digest its insect prey, and should lead to fascinating novel details about the ultimate source of the genes involved in plant carnivory. I can think of few genomics projects that offer more potential return on a modest investment of resources. 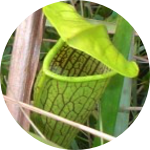 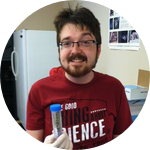 Growing up just outside of New Orleans, I was unexpectedly introduced to carnivorous pitcher plants as part of a third-grade science lesson. I was amazed that such unbelievable plants could grow so close to home, literally right in my teacher's back yard. Many years later, after earning degrees in Biological Sciences (B.S.) and Botany (M.S) at Mississippi State University and honing my skills in bioinformatics and statistics, I've come back around to study those same strange plants.

I am fascinated by the evolution of novel functions, which makes a carnivorous plant an ideal system. By using advanced genome and transcriptome sequencing methods, combined with supercomputer assembly and annotation, I hope to find out how plants were able to develop functional digestive systems. This will include identification of the individual genes responsible for the production of digestive enzymes, and their evolutionary background. In the case of Sarracenia, it is also important to investigate the role of the plant's microbial symbionts in the breakdown of trapped insect prey.

2 Lab Notes Posted
Wake Up! Sarracenia Come Out of Dormancy
Plants, Bacteria, & You