Projectile weapons were essential to the daily lives of ancient people. Although studied by archaeologists for decades, questions and misconceptions remain about the potential of spears, darts, and arrows to incapacitate prey. This project uses an experimental approach with replica weapons, skilled users, and modern observational equipment to study the terminal ballistics (impact and penetration) of stone-tipped atlatl darts and arrows, yielding needed data about early hunting capabilities.

Frequently, archaeologists use concepts from firearms research, as well as laboratory methods with controlled launching mechanisms and targets like ballistics gelatin to understand ancient weapon performance. But on closer inspection these methods do not always capture the same principles that made stone-tipped spears, darts, and arrows (projectiles that are extremely different from bullets) effective for hunting large prey. Studying these weapons also requires crafting, using, and observing them under more naturalistic conditions. This project is the final phase in a larger research program to study ancient hunting weapons under such conditions, using carefully made replicas, skilled users, fresh animal carcasses, and sophisticated observational equipment.

Early humans across the globe had to adapt to local conditions to survive and thrive. This included developments in weapons for hunting and defense. But archaeologists are beginning to question our assumptions about ancient weapons and what they meant for human adaptation. When were weapons effective, when did they fail in either defense or meat acquisition, and how did people alter their design to compensate? Do design changes manifest in noticeable ways in the archaeological record? We are exploring the properties of ancient hunting weapon performance using a statistical approach that draws from a large sample of shots with variable reconstructed darts and arrows. The results will be useful to anyone wanting to know more about the design and efficacy of these ancient tools.

The project will involve an experiment using a fresh bison carcass, atlatl darts and arrows launched by skilled users (including Donny Dust), and knapped stone projectile points. This will be the sixth such experiment using a continually improving protocol. As the protocol uses high speed cameras and markings on the shafts to observe flight and impact, this allows numerous details to be captured simultaneously regarding projectile ballistics and damage to stone points and the bones they encounter. The results are useful to archaeologists for answering a number of questions, however, the immediate goal is to expand a database for finalizing a statistical analysis of dart and arrow terminal ballistics in soft tissues, allowing a better assessment of key performance variables.

Already included in the test arsenal are two high speed cameras for tracking the flight and impact of darts and arrows, as well as impact velocities and deceleration during penetration. The Stalker Pro II radar gun uses Doppler radar to provide extremely accurate measurements of both release and downrange velocities for individual shots, making it perfect to corroborate the velocities measured with the camera. Comparing velocities from two instruments will better substantiate the results, as potential errors in velocity measurement are a concern. Additionally, the radar gun will be useful in many future experiments for further documenting velocities of ancient projectiles. The bison will be provided by a local Colorado rancher who has quoted the listed price and will allow the experiment to be carried out on his ranch. Last, Tony Soares has prepared exceptional replica Folsom points that will join an arsenal of 40 other stone points already collected for the experiment.

This experiment is part of the most sophisticated program of experimentation on ancient weapons in existence right now. It is pioneering new ways to gather and process data in projectile performance that have the potential to fundamentally change the ways we look at ancient weaponry and assess what w can learn about it. Devin just finished his PhD project that this new experiment grows out of--noone knows this area of work better than he and Donny and noone is even close to their level of sophistication. 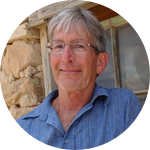 The experiment will occur over one day in early June of 2022. Following the experiment, the bones will be taken to a dermestid beetle colony at CU Boulder. Pettigrew will then process the shot data and complete the statistical analysis (already underway) along with collaborators from the Laboratory for Interdisciplinary Statistical Analysis at CU Boulder. Following publication of the results, they will be presented to a more general audience on our educational website, basketmakeratlatl.com.

Completion of the primary experiment

Completion of the shot database for statistical analysis

Submission of final manuscript for publication

Presentation of the results on Basketmakeratlatl.com 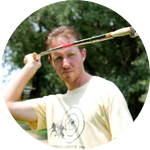 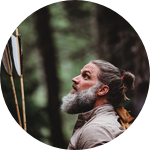 Devin Pettigrew is a research and field archaeologist, hunter, angler, and general outdoor enthusiast. Devin's passion is understanding the weapons, tactics, and ecologies of ancient hunting peoples. To research this, he uses experimentation involving reconstructed tools like the atlatl and dart, as well as ethnographic (more recent historical) accounts of Indigenous hunting societies, and data from modern wildlife management. The results provide details of ancient human adaptations through the traces they left behind. Devin is currently a scholar in residence at the University of Colorado Boulder.

Donny Dust is a Marine Corps Veteran who is considered by many as a world wide expert in remote primitive survival, ancient/historical technologies, lithic arts (flintknapping) and emergency preparedness. Donny's passion for ancient ways of living goes beyond theory and guesswork and into true application of living wild.
Donny utilizes his countless days living among the world's wild landscapes and fully immersing himself in unique cultures in order to offer one-of-a-kind wilderness self-reliance training and education at his school Paleo Tracks Survival. No other person has such a diverse background to leverage when providing his one-of-a kind, in-person classes focused on remote primitive living, traditional survival skills, and ancestral technologies and practices. His expertise draws clients from all over the globe, including the UK, South America, Canada, and Australia.
Donny has authored two books (SCAVENGER and EARTHROAMER), worked on feature films as a technical consultant, taken part in several different network television programs, conducted numerous podcasts and radio appearances, , as well as spoken in front of crowds who have traveled from all over to hear him speak and learn of his wild adventures. Known as the "Professional Caveman", Donny is nothing but professional, adventurous, and creative.

All animals used in these experiments are raised for meat and put down by ranchers immediately prior to the experiments using humane methods. Animals are not killed or harmed using ancient weapons. This protocol was approved in the previous bison experiment by an Animal Care and Use Committee, and the upcoming experiment follows the same protocol. After the projectile experiment, the carcasses are butchered using stone tools and a majority of the meat is salvaged (very little meat is lost around wound channels). This means that very little is lost that would have been retained if the animals were merely slaughtered and butchered, while science is gained. The last experiment on an old female bison was highly informative, but left questions and gaps that need to be filled to produce a good dataset. The next experiment will involve a young bull, will increase the shot database for statistical analysis, and will further improve the experimental protocol.

Example results from the previous experiments:

Showing a replica of a Late Archaic "Basketmaker" atlatl and dart weapon system, based closely on artifacts from a cave in Arizona. Replicas of Basketmaker weaponry do not carry high energy or momentum, and formed an important part of the test arsenal, alongside larger and heavier darts. We wanted to know if Basketmaker darts like these could be used in the past to hunt big game. 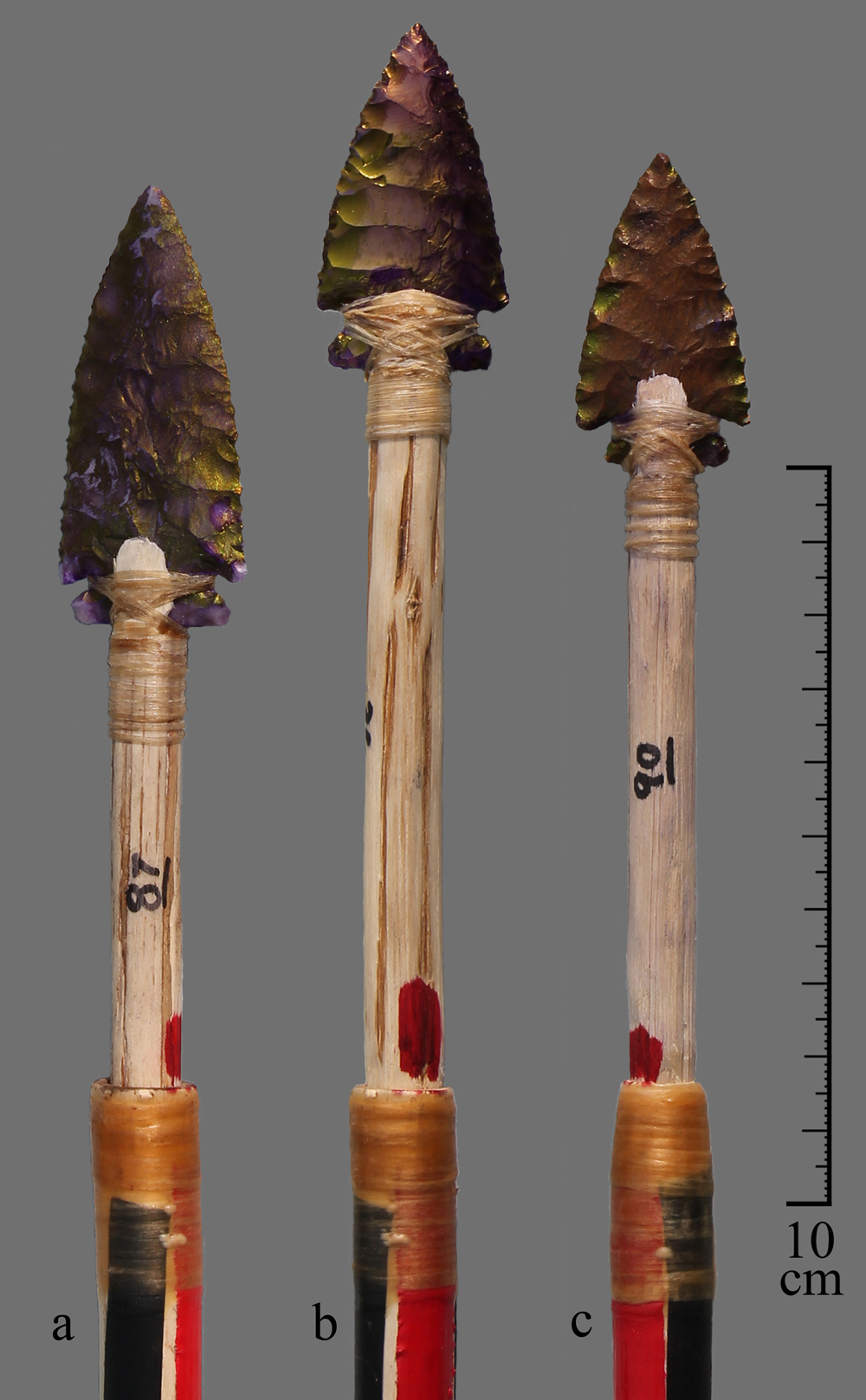 Examples of knapped stone points hafted on foreshafts and inserted in the socketed ends of replica Basketmaker atlatl dart mainshafts like the one shown above. Even these light darts could produce lethal wounds on a bison, but only when armed with points of sharp materials. If they directly encountered ribs penetration stopped. 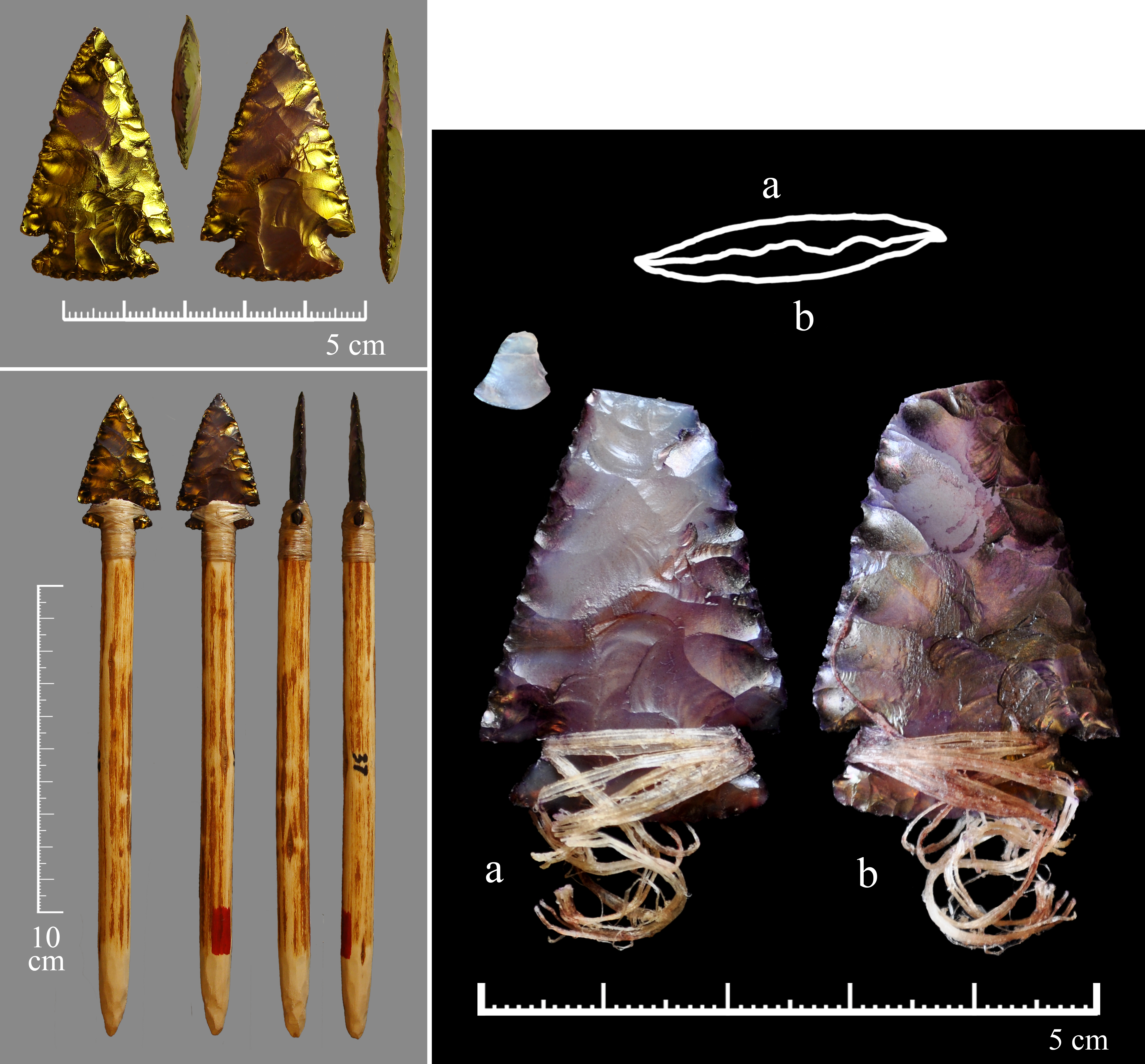 An example point that struck a rib and cut through its own haft bindings, failing to penetrate deeply. Results are useful in many ways. This foreshaft is based closely on an artifact from a cave in Wyoming. Microscopic use-wear analysis performed on the point showed tiny striations raking across the face in many directions. These striae are similar to those that result from experimental knife use, but in this case striae raking obliquely across the point resulted from the point turning in its haft after contacting the rib.