I study vulnerable frog species that inhabit human-constructed wetlands in the Grand River Grasslands of southern Iowa. I want to test whether farm ponds in the region support frog populations and what pond and landscape characteristics are beneficial to these species. I will use an Unmanned Aerial Vehicle (drone) to generate high-resolution imagery of the wetland, enabling me to incorporate seasonal vegetation dynamics into habitat models for frogs.

Wetlands are highly dynamic ecosystems that provide habitat for aquatic organisms, including amphibians. The widespread destruction of wetlands in the Midwest has been disastrous for some amphibian populations. Fortunately, humans have also constructed a large number of ponds in the region, which have the potential to support amphibians. I'm studying what factors make human-constructed farm ponds in southern Iowa suitable habitat for frogs. My work complements ongoing efforts to restore terrestrial ecosystems in the region and promote wildlife conservation in a working agricultural landscape.

In the Central United States, agricultural ponds are abundant and often outnumber natural wetlands. The prevalence of ponds today poses an opportunity to conserve a range of aquatic and terrestrial wildlife that use farm ponds as habitat for reproduction, foraging, and shelter. However, much is still unknown about the characteristics which allow these ponds to support frogs. Tadpole surveys I conducted in 2016 indicate that at least 7 amphibian species inhabit farm ponds in my study region and that wetland vegetation is a critical component of habitat quality. It's still unclear how changes in vegetation and water levels affect frog species in these constructed ponds.

The goal of this project is to assess the presence of amphibians in human-constructed wetlands in southern Iowa and to link patterns of amphibian occupancy to specific pond and landscape characteristics indicative of habitat quality. I will be surveying each wetland for tadpoles using aquatic funnel traps. Each pond will be sampled four times during the summer of 2017. Concurrent with amphibian trapping, I will use a drone equipped with a high resolution camera to document wetland vegetation and water levels of ponds during each sampling period. Wetland imagery will be processed, orthorectified, and digitized in a geographic information system. Changes in wetland vegetation and water levels will then be linked to tadpole presence through occupancy modeling.

STRETCH GOAL: An additional battery will enable me to fly longer and collect more data each day without having to return to a power source to charge up.

The DJI Phantom 3 will allow me to map changes in water levels and wetland vegetation during the frog breeding season. While satellite imagery is widely available, it is often too grainy to detect wetland vegetation accurately. It can also be challenging to link satellite imagery to ecological patterns in real time since it is collected only periodically and does not allow me to record changes in vegetation across the summer. In contrast, drone-derived imagery is time efficient, high resolution, and can be collected at the same time that I collect data on amphibian abundances.

The budget items described here will be used to purchase a drone to conduct this research and will cover the costs of the Federal Aviation Administration’s certification exam for flying a drone for research.

This is a very exciting project, focused on a group of amphibian species whose populations are declining and an underappreciated habitat that may help to reverse these declines. I can think of no one better to tackle this work than Timothy Swartz, who has designed a highly innovate research framework to do so. 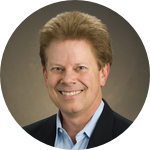 Dr. Jim Miller
Associate Professor
Department of Natural Resources and Environmental Sciences, University of Illinois
Timothy is the kind of researcher who puts everything he has into both study design and field work. Last summer I saw him work long hours in the field every single day, generating an awesome data set that he has already started turning into valuable knowledge. He wades through muck, braves the heat, and endures bites from ridiculously painful backswimmers in the name of high quality work. Put a drone into his capable hands and the world will receive very interesting new perspectives into amphibian conservation in human-constructed habitats. 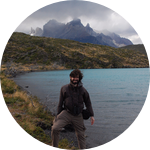 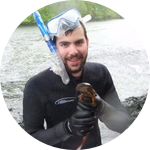 I grew up exploring a small creek near my home in Virginia. It was there that I discovered frogs, tadpoles, water beetles, leeches, fish and snails. Ever since then, I've been fascinated with aquatic ecosystems. In college I began to learn about the many threats that face these ecosystems and their animal inhabitants. I am currently working on my graduate research at the University of Illinois, continuing a lifelong passion to understand aquatic ecosystems and ways that we can protect them.

4 Lab Notes Posted
Thank you!
What do I do all summer?
Why are farm ponds important for frogs?

Human-constructed ponds built between the 1930s and 2010 are abundant in southern Iowa and throughout the Midwest. These ponds are critical for agricultural production and soil conservation in the region. They also provide habitat for frogs, macroinvertebrates, crayfish, and introduced fishes. The structure of the aquatic communities of these ponds is dynamic, tracking and responding to changes in vegetation, water quality, and water levels.

A selection of ponds are included below to illustrate the diversity of these human constructed habitats. 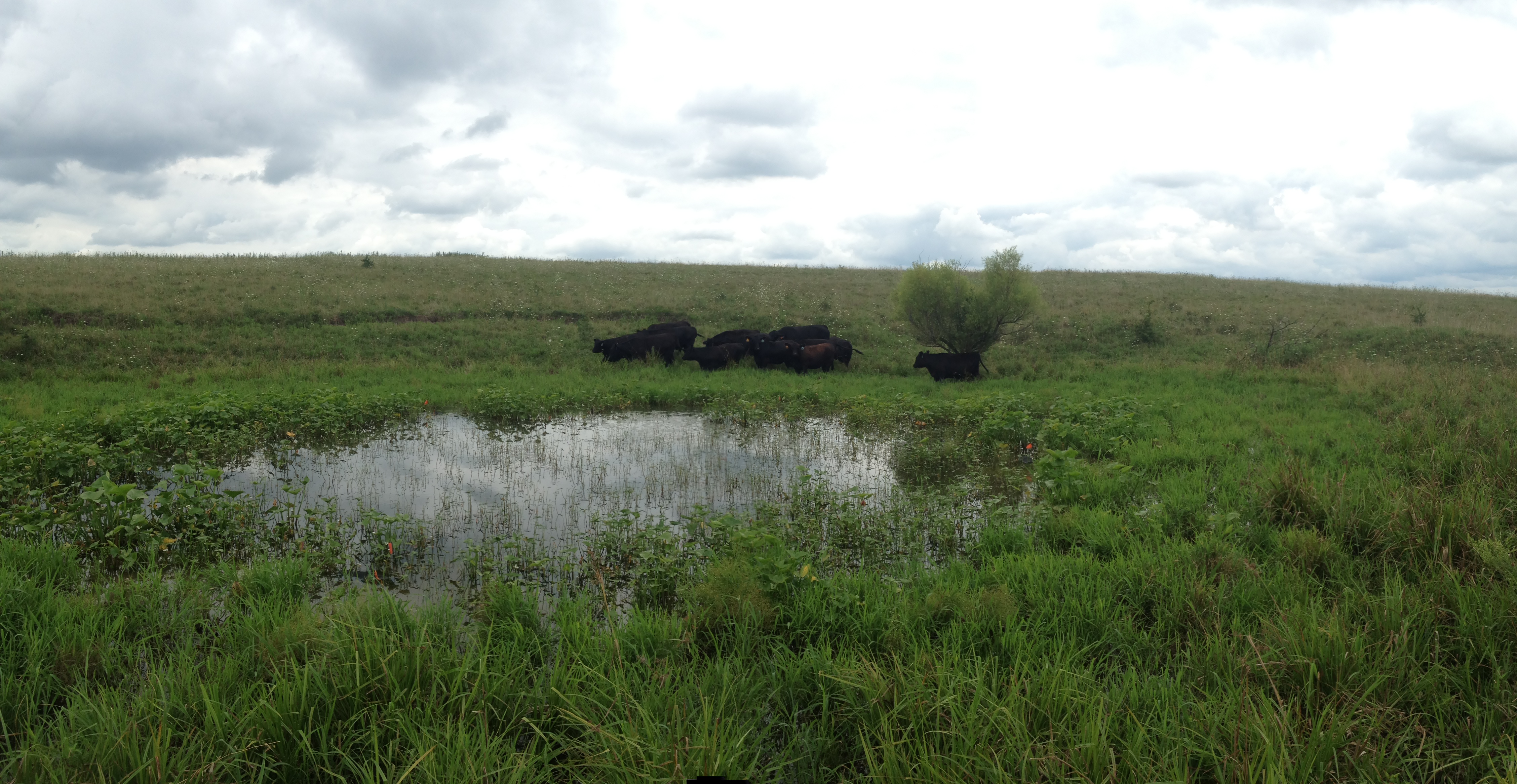 Despite cattle having free access to this pond, wetland vegetation is abundant. This pond is shallow, and during the course of the summer, the water surface area fluctuated dramatically.

Teeming with toad and leopard frog tadpoles in late June, by mid-July this pond has dried complete. Water levels fluctuate greatly in both human-constructed and natural wetlands, with important effects on the aquatic organisms living in them. 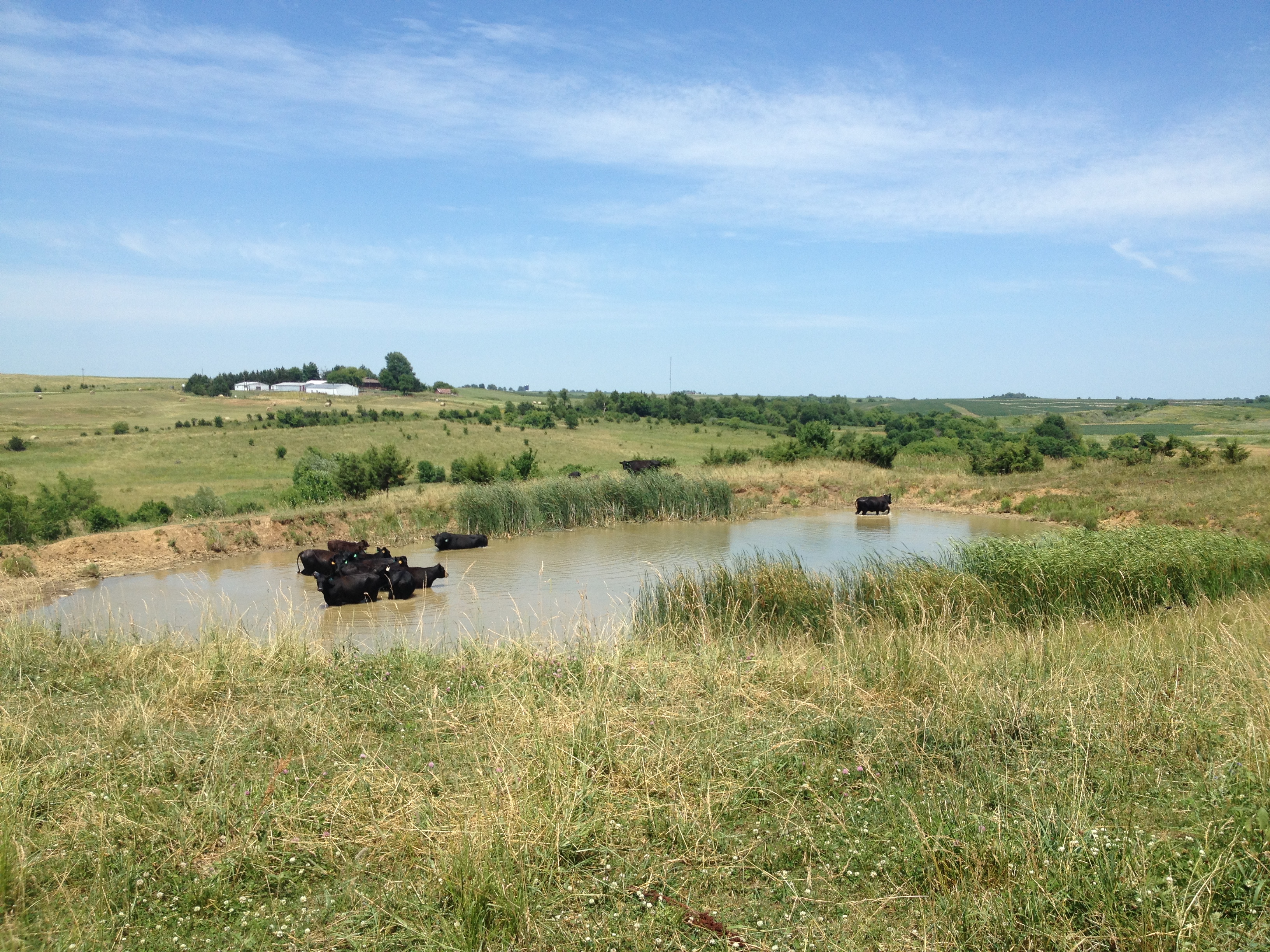 A typical farm pond in southern Iowa where cattle have free access to the wetland. Vegetation is minimal along the pond edges and is present only in clusters of cattails (Typha spp.) along the pond margin.