The goal of this project is to travel to Cambridge University and observe selected College Choirs. I'll learn how British choir schools function on a day-to-day basis, how the singers are trained, and how the British choral sound is produced. I'll present my findings in the form of a lecture recital which will demonstrate to viewers the difference in sound between British and American choirs and what makes the difference.

British choirs have a very different sound than choirs in the United States. Choirs in British choir schools are known for having uniquely pure intonation, which is the accuracy and unification of a choir’s pitch. Additionally, the British approach to tone placement is much different. Eric Whitacre, a successful American choral composer, describes this tone as “bright and clear, with a healthy spin and not too much vibrato”. British female choristers of the present day are known for their straight tone to model the original sound of young boy sopranos. On the other hand, American choirs are sometimes described as having a “rounder tone” and typically use with more vibrato. These differences in tone are due to the differences between the American and British approach to resonance placement.

My lecture recital will educate other professionals and audience members who have an interest in British choirs. By illustrating the differences between British and American choral sound, it is my hope to give singers and conductors in attendance valuable insight into the British approach to tone and placement which they can apply to appropriate repertoire they perform. This project will be important to my continued studies in graduate school where I plan to study choral conducting and sacred music. It will give me valuable experience conducting my own recital that I would not otherwise have as an undergraduate.

With this funding, I will be able to live in Cambridge for 2 weeks to observe rehearsals, concerts, and evening services. I will also be able to purchase my own sheet music to do an intensive study on the music that choirs at Cambridge will be rehearsing. Finally, I'll be able to hire 4 section leaders for my choir to assist me in evaluating the progress and accuracy of the choir I conduct in my recital.

During my stay, I'll maintain a blog where I'll share my observations and experiences so you can stay informed!

I have partially been funded to do this project through the Magellan Scholar program at the University of South Carolina. However, the amount I have been awarded is only enough to cover my airfare and 1 week of dormitory housing. This funding will enable me to live at Cambridge for a full two weeks, provide me with meals each day, and give me the opportunity to hire section leaders and purchase sheet music for my choir.

*If I raise half of my budget, USC has agreed to match the remainder. 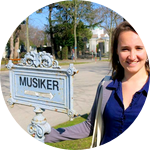 I am a junior at the University of South Carolina from Nashville, Tennessee majoring in music theory. I am an alto in the USC Concert Choir and am currently taking an advanced choral conducting class. Singing in choir has been an important part of my life for as long as I can remember. As a result, I have a strong passion for choral music--composing, singing, and conducting it. I am also passionate about theology and plan to continue my education in theology and sacred music. I enjoy music and travel of all kinds! Thanks so much for taking interest in my project.

My mentor for this project is Dr. Alicia Walker, Associate Director of Choral Studies at the University of South Carolina. Dr. Walker directs the University Chorus, the USC Men’s Chorus, teaches undergraduate conducting and choral methods, and supervises student teachers. She also teaches courses in sacred music as well as music education at the graduate level.

Why this is important for me: I have been involved in choral music since elementary school. I started out in church choir and eventually began to sing in my school choir. Singing in choir has taught me how to work in a team to create something beautiful. It has enhanced my musical skill and ear training. Finally, the choir directors I have had and the people I have met have instilled in me the goal of becoming a choral conductor and working with choirs for the rest of my life. For these many reasons, I feel that it is important for me to travel to England, the place where the choral tradition is both historically strong and currently thriving. This will give me the opportunity to observe some of the finest choirs in the world, and to learn as much as I can about the form of music-making that is near and dear to my heart. Equally exciting to me is the opportunity to bring back what I learn about this choral tradition and create a program of my own. I know the moving power that a strong choir can have on any person and I want this process to become my career. Therefore, it would be a great honor to begin my choral conducting career through this project and instill in audience members the passion that I have for this art.