Sociality in spiders is extremely rare, but it has evolved several times. This begs the question: why be social? I aim to answer this by using social spiders found in Ecuador. I will determine the benefits and costs of sociality by measuring prey capture rates and parasite loads for four different species with varying levels of sociality. As social beings ourselves, we can understand social behaviour and cooperation by studying these unique spiders.

The overwhelming majority of spiders are solitary and even aggressive towards conspecifics. However, 24 species in 8 unrelated families have evolved to coexist in social groups. One species in particular, Anelosimus eximius, can form colonies with up to 10,000 individuals. Some common drivers of sociality in animals include more prey per individual (Yip et al. 2008), protection from predators, or reduced metabolic costs (Hou et al. 2010). However, animals living in groups also attract parasites (Cangialosi 1990). In particular, social spiders are susceptible to kleptoparasitic spiders living within the nest, clutch-level parasites infecting egg sacs, and parasitoid wasps. The objective of this project is to examine some of these costs and benefits of sociality in Anelosimus eximius.

Eusocial insects like ants or bees are often used to model sociality, however their system of social organization is unlike that of any other animal. With only a few fertile queens and many sterile workers, ants are difficult to relate to. Social spiders, on the other hand, have no such system of organization. Each spider has more or less an equal chance of mating and passing on their genes

Each social spider colony is its own population of the species, and there is very little mixing of genes between the different populations in the landscape. However, all colonies share a similar suite of parasites. We can use social spiders and their parasites to model transmission of disease through a metapopulation. This has potential implications in both zoonotics and medicine.

I will answer my research questions by meeting two objectives: obtain an energy budget for colonies of different sizes and determine the effect that different types of parasites have on individual and colony fitness. The field work to meet the first objective was carried out in the summer of 2016.

To meet the second objective, I will locate up to 45 spider colonies of varying sizes in the summer of 2017. Each nest will be assigned to one of three treatment groups: no parasites, normal parasite levels and higher than normal parasite levels. Nests of all three treatments will be surrounded by a fine netting to keep anything from getting in or out. After one month, all new egg sacs will be collected and dissected to determine clutch sizes and presence of parasites.

The social spiders my lab uses for research are found only in the lowland tropical rainforests of South America. That means, to do any meaningful research, I have to get down there. The budget items listed are mainly to do just that. Roundtrip airfare runs approximately $1000, and field stations usually charge about $15 dollars per day for food and lodging. Unfortunately, that really adds up during a 90 day field expedition. The rest of the budget is for miscellaneous equipment, such as fine netting to surround social spider colonies with during parasite exclusion experiments. The outlined project budget covers only a portion of my PhD research needs. It essentially just covers the travel and living expenses for a three month field trip to Ecuador. After the summer 2017 field season, I will have at least one more to follow. However, this budget will go a long ways towards a stress free and successful research trip next summer.

With two field seasons under her belt, Sam has the experience to succeed in this exciting project. This past summer Sam measured energetic costs and benefits of group living in the social spider she will be working with; the previous year, she helped characterize the parasites infecting this spider's colonies. This experience will prove invaluable in her quest to asses the burden parasites impose on social groups, a question not only relevant to social spiders, but to other group-living organisms, including humans. 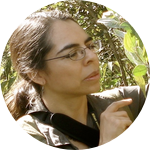 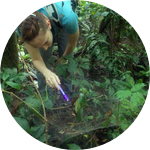 I started my career as a biologist at the University of Wisconsin in Stevens Point. There I was heavily involved in our student chapter of The Wildlife Society, and volunteered on a number of projects including owl and woodpecker banding, carnivore tracking surveys, and small mammal trapping. During this time, I also spent summers doing field work with private and public agencies, where I solidified the skills I was introduced to in my education. I knew I wanted to continue on to graduate school, and looked at a wide variety of labs focusing on ecology. When I found Dr. Aviles at UBC, I was immediately drawn to the research questions pursued by her lab. Social behaviour is such an interesting and important aspect of the biology of many animals. But at this time, I didn’t particularly love spiders.

I took a leap of faith and went to Ecuador to start work the summer before my first semester at UBC. It only took two weeks for me fall in love with spiders. They are fascinating and weird and the more I learned the cooler they became. Not only that, but my eyes were opened to the whole world that exists at a much smaller level than us. Now, I am constantly advocating for spiders, and I try to dispel the fears of those around me.

That first field season in Ecuador, I helped another graduate student with his project dealing with nest associates of social spiders. These are other spiders that live within the social spider nest, using it as their habitat. There are entire communities of spiders using these “habitat patches”. There we learned that some associates are commensal, while others are parasitic. I already have a framework for understanding how these parasites interact with social spiders, and am using this framework to jump off into my own project.

4 Lab Notes Posted
An update on progress in the field...
See how we work
Meet the social spider