Steve researches how to make nitrogen-containing molecules more efficiently replicable. Nitrogen is a difficult element to work with, but very beneficial when wrangled: about 90% of the 200 most common pharmaceutical drugs contain nitrogen, despite the challenges in doing so. His task is essentially creating a blueprint so other scientists can create new drugs with literally tons less waste, and innovate more efficiently.

Steve is a scientist and professor, currently teaching at Willamette University in Salem, Oregon. As a visiting professor he is ineligible for most grants that tenure-track professors can apply for to fund their research. As a result, he is forced to pay for his research expenses out of pocket.

Steve's summary of his interests, as quoted from his faculty page at Willamette, are: "Development of new methodologies for the synthesis of pharmaceutically relevant heterocycles; design and study of novel chemoselective acylating reagents; total synthesis of bioactive natural products."

The cost of Steve's research he estimates is $2,000 to $3,000 per year coming out of his pocket. The goal I have set here is modest in compared to his needs.

The significance of this project is profound in two very different ways.

Foremost, although it may seem dry to non-scientifically minded people like Steve's sister who is creating this page, efficiency has a huge ripple effect besides the profitability margin or the great feeling of making progress. The efficiency that Steve is striving for in his research to make nitrogen-containing molecules more easily replicable means that other researchers working with nitrogen, which includes most scientists working in pharmaceuticals and in agriculture, will spend far less time, money, and chemical resources in their own innovations. For example, if a chemist working on a new drug needs to harness nitrogen and their current method employs 4 parts of x chemicals to get every one part nitrogen that they need, Steve's research could help them reduce that waste byproduct to 2 parts of x chemical to every one part nitrogen. When you're talking about pharmaceutical development, that will multiply hugely to reduce wasted byproducts literally by the tons. That is why his work is considered "green chemistry." It will also have the effect of reducing the time it takes for other scientists to work with nitrogen, as it can be very fickle to work with. Reducing that time results in a more efficient pharmaceutical industry, which results in less money going into research and development, and therefore reducing costs of drugs for more people to access. There is therefore an amazing incentive to support Steve's work for a massive reduction in environmental impact of the pharmaceutical and agricultural research sector, but also in the overall social good that can come from those sectors.

The other reason this research is so important is on a smaller scope, but still important to me, his sister. That's for the success of my brother's career. It's a tricky situation he is in: hired as a visiting professor he is not eligible for the grants that tenure-track professors can receive to support this kind of ground-breaking research. The catch-22 (no, we are not related to Joseph Heller) of course is that Steve needs to be producing original research to find a tenure-track position and ultimately be able to get grants for his research. Take it from me, I've known the guy since I was born: he's a freakin' genius. Not just that; he's a rare species of scientist that cares equally about the chemical equations as he does about the social good of his work. His ethics combined with his scientific skills are truly a gift to this world, and the more he can worry about his research and his teaching, and the less he needs to worry about whether he can afford to make it happen, the better it is for everyone; literally.

Steve will be able to purchase materials (equipment and chemicals) to conduct his research from the money raised here. He will guarantee to carry out researching possible models for replicating nitrogen-containing molecules more efficiently. This is somewhat like designing a jig-saw: it needs to be tested, and not every test will be correct, but each manifestation is a closer-to-perfect version than the last.

Steve estimates that his out-of-pocket expenses are about $2,000 to $3,000 per year. If he takes on full-time student researchers over the summer, that adds about $5,000.

Christine's knowledge of the specific breakdowns is a bit fuzzy but it is largely related to chemicals and equipment. Once Steve receives this gift for Christmas he will be able to edit this section and make it more specific. 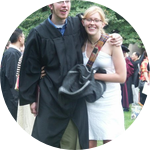 Steve's professional interests are: development of new methodologies for the synthesis of pharmaceutically relevant heterocycles; design and study of novel chemoselective acylating reagents; total synthesis of bioactive natural products. His sister copied and pasted that from his faculty profile because she does not know what any of that means.

Additionally, he loves his partner Lisa, his dog Dewey, his family, and nerding out really hard about a lot of different subjects besides Chemistry, too, especially education policy. He also loves beer and coffee, the great northwest, and his students and faculty coworkers at Willamette. And his sister is the coolest person ever. (ha, ha).

Steve hates bananas. Don't ever get him one. Steve's younger sister, Christine, created this fundraising page for Steve as a Christmas gift. As a personal assistant and artist, she thought she could amplify her gift to him by asking other friends and family to donate as well through this giving site. Steve and Christine are awesome siblings who like poop jokes and talk about the meaning of life together, and have been on a wedgie truce since 2010.