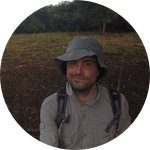 I am an environmental biologist/bioinformatician specialized in invertebrate biology, currently working as a Marie-Curie Fellow between Cardiff, UK and EMBRAPA in Brazil. I have been actively involved in several NGS-based genomic and transcriptomic projects to assemble and annotate several invertebrate genomes. I am also involved in projects related to evolutionary ecology, phylogenetics and population genetics and genomics, including functional genomics of organisms living in extreme environments. I am particularly amazed by the volcanic Pontoscolex corethrurus, which became the main subject of study during my Ph.D. research project.

Luis's pledge activity based on country

Projects that Luis funded that have shared project outcomes