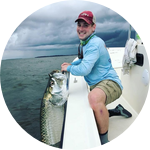 Dr. Noah Bressman is a Postdoctoral Research Fellow at Chapman University. He received his PhD from Wake Forest University studying biomechanics, functional morphology, and behavior. More specifically, Noah focuses his studies on amphibious fishes, how they move around on land, how they find their way around on land, and why they go onto land.

Noah has always had a passion for fish since the day he was born, but his experiences with amphibious fishes began the summer after his freshman year of college. While taking a summer marine biology course at Shoals Marine Lab, Noah noticed a 2" fish had escaped from a tank and moved about 10 feet away. He thought this was odd, but put the fish back. The next day, another fish escaped and went to the exact same spot on the tile floor! This couldn't have been a coincidence, so Noah began his investigation. He found out this species of fish, the mummichog (Fundulus heteroclitus), is capable of breathing air to some extent. Using high-speed videos, he was able to describe how they can effectively move around on land using a combination of a jumping and uprighting behaviors.

After getting a grant from the Andrew W. Mellon Foundation, Noah was able to continue this research the next summer, and went on to describe how they can orient and navigate toward water (and other reflective surfaces like foil and tile). He published this research in the Journal of Experimental Zoology, which was publicized on Gizmodo and Discovery Canada's show, Daily Planet.

Noah continues to study the fascinating field of amphibious fishes, and shares research updates on social media at his page: facebook.com/noahcarlfish, and on Instagram and Twitter @NoahwithFish. He also educates the public on fish biology through his biological artwork and the scientific blog that he maintains for the Discovery Channel Show, A Fishing Story.

How do amphibious fishes find their way around on land?

Hey Everyone!On Tuesday, April 14th at 9:30 am EST, I will be defending my PhD dissertation on the behaviors, terrestrial locomotion, and orientation of amphibious fishes, which includes the resear...

Hey Everyone,Thanks for being patient with me and I hope you are staying safe! I wanted to let you know that I have submitted this research for publication in the Journal of Experimental Biology! O...

Hey Everyone,I have a bunch of updates! I presented the results of the project this summer at the Joint Meeting of Ichthyologists and Herpetologists in Snowbird, Utah, where it was received with gr...

Hi Everyone,I am excited to say that my analysis of the data is complete! Overall, I have evidence that these fish use chemoreception (i.e., taste, smell) to find their way around on land. However,...

Hi Everyone,I am now back from Florida after successful experiments and data collection! I have plenty of promising data on walking catfish terrestrial orientation, and it seems like some of my hyp...

Hi Everyone,My UF collaborators already collected about 100 catfish for me, so I’ve already started experiments! Once I finish the control group today, I should be able to figure out which senses t...

Hi Everyone,My car is packed up with all of my research equipment and I am beginning my trip down to Florida to start experiments next week! Additionally, I’ve interviewed over 120 people who ave p...

Hi Everyone,Thanks again for helping us reach our funding goal! I just wanted to let you all know that I have already started gathering background information on walking catfishes from interviews o...

We have reached our funding goal of $1000!!! Thank you everyone for your donations and support! I shall start ordering and preparing the research equipment next week to get ready for my upcoming fi...