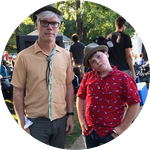 I am a professor of Biology at the University of Mississippi. I received my Bachelor of Arts degree in Biology in 1986 from Hendrix College and then received a Master of Science in Botany at Louisiana State University in 1989 studying factors controlling distribution patterns in low-salinity tidal marshes in Louisiana (advisor - James B. Grace). I continued my studies in Botany at LSU, receiving a Ph.D. in 1994 (advisor - William J. Platt). I studied population responses of a fire-dependent forb to variation in fire season. I was a Mellon postdoctoral research fellow at Brown University in 1994 and a National Science Foundation-supported postdoc at Brown University in 1995 (supervisor - Mark Bertness). At Brown, I studied the roles of disturbances, interspecific competition, and facilitation on zonation and patterns of plant species diversity in Rhode Island salt marshes. I began my academic appointment at the University of Mississippi in 1996, at which point I began my study of carnivorous plants. I study how disturbances (in particular fire) affect competitive interactions between carnivorous plants and their noncarnivorous neighbors with the ultimate goal of understanding the factors that maintain high plant species diversity. Two key publications from this work are Brewer (2003) and Brewer et al (2011). My work has shown that carnivorous plants are more likely to be associated with wetlands than are noncarnivorous plants. Carnivorous plants frequently co-occur with noncarnivorous plants with wetland adaptations in wet savannas. Species coexistence in hyperdiverse assemblages in wet savannas appears to be due to competitive equivalence rather than to niche differences. I have published 60 peer-reviewed articles and am an author of a chapter in a soon-to-be published edited book on carnivorous plants.

Dear Backers, I want to thank you SO MUCH for your willingness to support this project. Alas, we were not able to reach our funding goal. I am still very interested in doing this research and will ...

26
1
2
Thanks Sherry!
How does the carnivorous plant, Drosophyllum lusitanicum, persist in dry habitats?
View comment