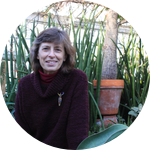 I am a community ecologist interested in the ecology of symbioses, especially those involving parasitic plants in prairies. Physically intimate associations between species, such as between a parasitic plant and host, can alter a host plant's responses to enemies, and produce unanticipated effects on communities. The management implications of these interactions are intriguing.

I received a B.S. from the University of Wisconsin-Green Bay, and subsequently a M.S. in Zoology and Ph.D. in Ecology from Penn State. Illinois State University has been my academic home since 1986, when I started as adjunct researcher and occasional non-tenure-track instructor. In 2013 I was appointed assistant professor.

Help me sequence wild populations of a medicinal plant (Pilocarpus)

Ever encounter something stringy and orange growing on a plant?  That might be a holoparasite called dodder (Cuscuta spp.).  Here's a photo Bethany Evans Campbell  took of one growing on wingstem (...

​What defines a plant parasite?

The presence of a haustorium.  That's an organ induced by the parasite when it comes into contact with a potential host.  It is the bridge between the vascular systems of the parasi...

A common hemiparasite on prairies

Hemiparasite
93
-1
1
Congratulations on reaching your goal! I look forward to following your work.
Help me sequence wild populations of a medicinal plant (Pilocarpus)
View comment
Krista - Thanks for the pledge of support! You and Molly are terrific! Vickie
Reviving restorations: Can native parasitic plants bring better balance to tallgrass prairies?
View comment