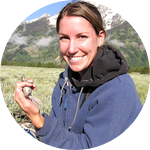 I am a wildilfe ecologist and Ph.D. student in the Ecology program at the University of California, Davis. I am studying wildlife movement ecology, behavioral plasticity and the impacts of environmental change. I am investigating these aspects on both passerines and sea turtles, using data from stable isotopes and biologging tags such as satellite telemetry and GPS.

I received a BS and MS in Biology from U.C. San Diego where I studied habitat fragmentation and edge effects on native species. I’ve spent over 14 years working both around the country and abroad in the conservation ecology field. This experience has included surveying nesting songbirds in the expanses of sage at Grand Teton National Park, co-authoring a guidebook on Madagascar birds while at Conservation International in D.C., searching for new species in the Malaysian rainforests, and living and working in Australia where I sorted through seafloor samples from Antarctica. Since 2011, I've been contracted to the U.S. Geological Survey focusing on sea turtle research

where we investigate animal movement behavior and conduct spatial analyses.

I’ve presented research in scientific publications and at conferences. I have been the first author on two scientific articles, co-authored 14 others, a book chapter, and two poster presentations. I recently had the honor of being named a National Geographic Explorer.

I spent a lot of time on tag retrieval in the fall and early winter. I was usually out there about four days a week, attempting to get back as many birds as possible with tags. And there is good ne...

It was a busy winter getting all the tags out and with your generous donations and the money from National Geographic, I was able to deploy 35 tags!! 17 of these were deployed at the coastal Califo...

I just wanted to write a super quick note to let you all know something encouraging for the project. I've been getting things ready for banding at the inland location (still have to make some cages...

My last lab note talked about how stable isotope analyses can help with understanding migratory connectivity for a larger sample of individuals. I added a stretch goal of another $1000 to cover cos...

There are only two days remaining in the campaign! I know I've said it before, but thank you AGAIN to all the people that donated! Before the campaign ends, I wanted to share with you one other way...

We reached the goal - next steps! (and a beautiful painting)

Thank you to all of the 59 backers that helped make this project happen!! Reaching 100% funding is amazing and I'm so excited to get the birds tagged this winter! I can't wait to share the results ...

Most birds make sounds, whether a barking call or a melodious song. However, not all birds learn these sounds through acoustic experience. Golden-crowned Sparrows are oscine passerine birds, one of...