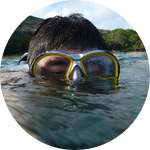 Born and raised in Honolulu, Hawaii, Blake received a B.S. in Biology from the University of Hawai‛i at Mānoa (UHM) in 2010. During his time at UHM he began working as a volunteer intern under Sean Callahan from the Department of Microbiology and Greta Aeby from the Hawai‛i Institute of Marine Biology on a newly formed project investigating coral disease in Kāne‛ohe Bay. As an intern he assisted in developing infection trials with the coral Montipora capitata, and initial assessments of the bacterial populations associated with this coral. Blake continued working on coral disease after being accepted into the graduate program at UHM. During his Ph.D., Blake's researched focusing on the molecular mechanisms of virulence utilized by bacterial coral pathogens, while also developing them as genetic systems. His research also included the characterization of bioactive compounds produced by marine bacteria. Blake has identified the etiological agents responsible for four different bacterial coral diseases, while he assisted in the description of a fungal pathogen affecting the crustose coralline algae at Palymra Atoll and a cyanobacterial disease killing corals off the coast of Kauai, Hawai‛i. Over the years, he has worked on numerous projects collaborating with and/or funded by The Nature Conservancy, NOAA, USGS, Department of Justice, and Scripps Institution of Oceanography. In addition to research, Blake has taught a number of laboratory courses at UHM including immunology, general microbiology, marine microbiology, and bacterial genetics. He received his Ph.D. in Microbiology in Summer 2016. He is currently a post-doctoral researcher at Oregon State University working in the lab of Claudia Hase.

Probiotics to save our reefs: Investigating bacteria that protect corals from disease

Preserved pumpkin as a scientific time capsule? Fungal and chemical analysis of pumpkin preserve from 1920

Thank you very much!
Probiotics to save our reefs: Investigating bacteria that protect corals from disease
View comment